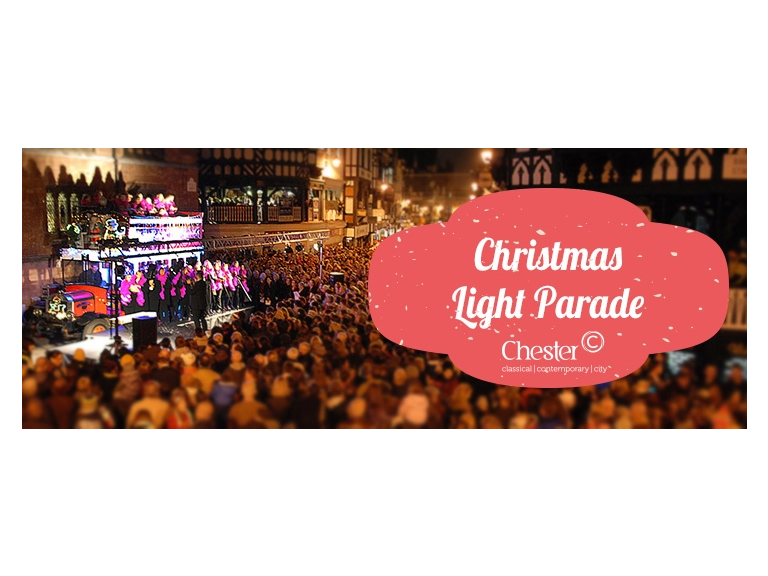 Chester’s glittering festivities get underway on 21st November at the spectacular Christmas Parade of Light magically turning on the festive illuminations as it passes through the city-centre streets.

The seasonal extravaganza led by the magical Queen of Light protected by the Tiger from Chester Zoo’s Lantern Magic will leave from the Abbey Gateway at the Cathedral at 6.30pm.

The procession will make its way past the new Christmas Market in the Town Hall Square via St Werburgh Street, Eastgate Street and Watergate Street to the new Winter Wonderland at Chester Racecourse.

The colourful cavalcade of characters in the Queen of Light’s procession will feature dancers, lantern helpers from local schools, Santa Claus on his sleigh with several Winter Wonderland characters, plus a specially lit Mini from Grosvenor Shopping Centre.

Dancing on Ice Champion and three-time Olympian, Beth Tweddle MBE will be officially opening the Ice Rink at Winter Wonderland and will switch-on Winter Wonderland’s 24’ high Christmas Tree with the Lord Mayor of Chester.

The audience can enjoy a performance by skaters from Deeside Ice Skating Group, followed by a choral performance and a taster of Theatre in the Quarter’s production of The Snow Queen to be staged at St Mary’s Centre in December.

Popular Chester-based girl band Indigo City who performed at Chester Rocks in 2012 will also be performing live at the Winter Wonderland as part of the grand finale.

There’s free admission for the Christmas Parade of Light audience to the Winter Wonderland’s Christmas Tree Lighting ceremony on the evening of 21st November.

The city of Chester’s forthcoming festive events’ programme is set to attract visitors from near and far to experience its unique offer.

The Christmas Market with Champagne Lanson in the Town Hall Square features a host traditional wooden chalets offering fabulous food and drink as well as a huge variety of gift ideas that cannot be found on the high street.

Another major festive treat is the new Winter Wonderland at Chester Racecourse 21st November-5th January featuring a real ice rink and a traditional fairground, plus a 3D Movie Room, Santa Letter Workshops - and Santa Claus himself as well as a Russian Standard Vodka Ice Bar and Alpine Bar for the adults.

There will also be a Christmas Market at the Winter Wonderland 21st November-24th December.

Just outside the City, the enchanting Lantern Magic is returning to Chester Zoo 12th-15th and 19th-23rd December, where families can share in an unforgettable night time journey meeting a colourful collection of animal characters en route and listening to the nocturnal sounds of the zoo.

Visitors will be able to visit the elephant house, explore the fruit bat forest, try their hand at lantern-making.and enjoy tasty treats as they add their Christmas wishes to the Giant Wishing Tree.

Perennial favourites return too including the traditional Roman Saturnalia torch light parade where Chester's Roman Legionaries reclaim the city as they parade through the streets with flaming torches, and the ancient Winter Watch Parade complete with dance performances, fire-breathers and sword fighting in the shopping streets of the history city centre.

Full details about the Christmas in Chester festive events programme are featured in a special guide available throughout the city and here.