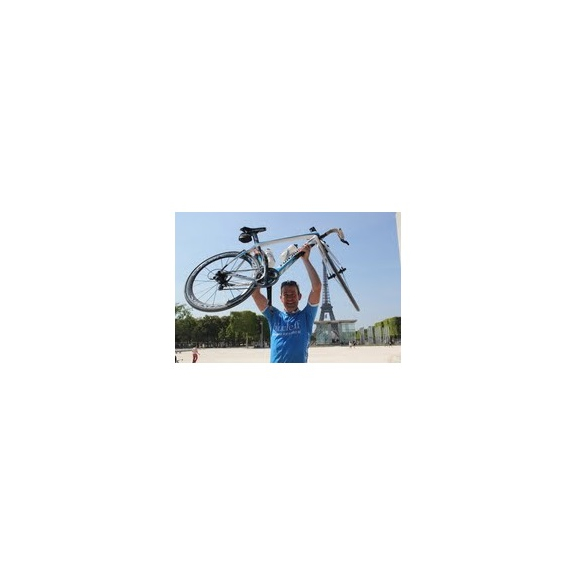 For six months I have had a picture of Paris and a cyclist on my wall. The caption read: "Me riding the final stage of the Tour De Force event on Sunday July 14th 2013."

It happened. After 3500 kms riding the bike all over Corsica and France, climbing mountains and hills which equate to over 45 kms in height gain, 3 weeks of riding and we've arrived in Paris. Very, very weird day.

I can't pinpoint the best day, they all had something about them, each day consisted of an achievement that made it unique and special in it's own way. If I had to choose, I would say Mont Ventoux stage for being the longest, hardest and most emotional stage. The Pyrenees stages were stunning, totally stunning, as was the 3rd stage up the East coast of Corsica. Alps - well most know of them, what can I say, but just a wonderful place to ride a bike. Then there has been the comradeship of the whole team, especially the Lifers, the 40 guys that have done the whole lot. I have respect for every one of them for doing what we have done as a team.

Overall we have broken the £300k mark to raise money for the William Wates Trust, which helps disadvantaged children, and wonderful to see every one of William's brothers out there having a go on the stages, his parents and the younger generation. One of the nephews, Frankie, 14 years old did a couple of stages including climbing Alpe d'Huez. He his damn light though :-)

Final message must be to the organisers. They are outstanding; I considered doing this event myself, organising and running it. No chance, having someone like Sarah, Tracy and Phil run everything for you makes it so much easier, and being fair a lot cheaper.

Would I do it again - without a shadow of doubt.

Thank you - if you have been following these blogs, I'm not a natural writer, I have been brain dumping and the team at the office making sense of it before posting. The delay has been more with the total lack of WiFi in France. I'm now in Paris and it's fantastic.

I'm writing this the day after the event. We all went to the Montparnasse Tower for celebrations and watched the fireworks for Bastille Day next to the Eiffel Tower. Today has been special time spent with Denise and Dilan, walking the streets of Paris. The weird thing is I have not stopped eating all day. Honestly couldn't walk past a boulangerie or patisserie without getting something. Crepes, Baguettes, anything going I've been eating it - still bloody starving now - I'm off to eat.

Check out the stats here