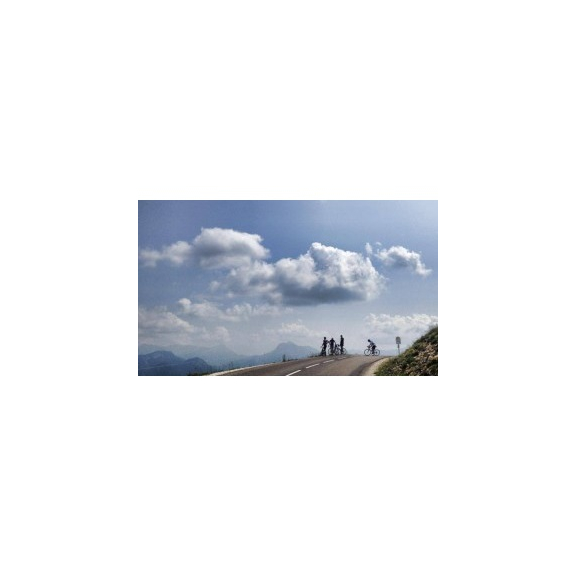 Today was the real final day. This is where it could have gone wrong and it would have mattered, not so tomorrow, that's more a procession into Paris.

It's been designed to be the final sting in the tail for the 100th edition of the Tour De France. On paper it's not terrible, only 125 kms, but the last climb is tough.

We lead out in a procession almost from the start along the lake near Annecy, a beautiful looking place, then into the hills straight away. I remember Phil in the briefing saying the Pros will keep it in the Big Ring all the way to the last mountain, and as I felt good, I thought, why not. Took some flack for it, especially when a few of us started really pressing on, until Elton in his witty humour (damn good rider) said "do you want to see something funny?" and then dropped it down a few gears and disappeared up the road with 2 others leaving me stuck in the mud almost (metaphorically, as its was bone dry). I could have been p***ed, instead I laughed and cracked on.

After a few Kms they were well out of sight, but fortunately our support vehicle came passed. They beckoned, so what I didn't do was ride behind the van for about 8 kms at a high pace, because that would never happen in the pro race or course. However, amazingly I did seem to catch up with the trio, and launch an attack past them, which resulted in them chasing me back in disbelieve. Oh how we giggled, I guess you had to be there being fair. Attacking over, I resorted to a more sedate group, who led up the next climb, imitating monkeys due to the extreme amount of bananas around. I fitted in.

The finale though was the last climb of the day, Phil briefed us, the first 4 kms were going to be hard at nearly 10%, what he failed to say was the following 7 didn't get any easier. It was a long hot slog to the top of Semnoz, greeted by the first arrivals in the open bar 200 meters from the top, drinking and celebrating, we were shouted at and abused to get to the final line at the top, where emotions kicked in.

We had achieved the final big stage; tomorrow is just a roll in. It was very emotional; this is the pinnacle of any cyclist to ride the Tour De France and to be at the top of the last mountain really brought it all home, exactly what we had all achieved.

Check out the stats here