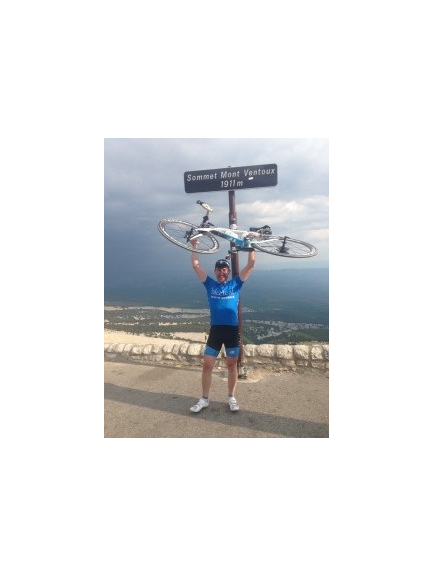 Grown men can cry, cant they? and no its not with the pain, we can handle that, well some of us can, its more to do with the emotions of achieving a big goal.

It's strange I never really set today's stage up to be a such an achievement, but Mont Ventoux has something about it.

Last year while I was on holiday, before getting my place in the race and before knowing it would go up the mountain, we took a family drive out up the same route that we were to ride. It was tough in the car, so to be thinking of doing it on a bike after 140 miles, was even more punishing.

We were all well briefed, we had a few smaller 4th category climbs on the way out from the start, and ensured we kept a steady pace. I say ensure, what I mean was attempt, as the pace typically did rise, at times cruising around 25mph. THe scenery was stunning. No two ways about it, this place is amazing, the smells of lavender, rosemary, pine. Fields of flowers and the back drop of the mountains looming.

You could see the mountain from quite a way off, there is a weather station right on the top, which can be seen from many miles, on top of what looks like snow capped mountain. It's not snow, instead its heavily tree laden until around 1300 meters, where it then breaks into a baron moon scape, with the road cutting through to the top.

Our plan was to ensure that all riders were on the mountain by 7.30pm. In order to climb by dusk. We arrived at the base, around 5.30pm. It was just tipping over 36 degrees, it had risen to 40 degrees an hour earlier. The feed station had a mixture of things, and two things I have never had together are pork pies with marzipan. not a typical mix, but it hit the spot.

The start line was about 10 metres back and the rivalry was quite high as to who was going to be quickest. I had no intent of fighting the 65 kilo mountain goats, i'm built for lower levels, but I was intent on giving it my best shot. Right from the start I got in a good rhythm, (considering we had ridden 140 miles that morning..) but soon the gradient went up and up and up. And as for my gears, they went down and down and - oh bugger, none left.

It was a long steady grind through trees, losing sight of the top very quickly, the trees gave some shade but it was still piping hot, like an oven at times. The kilometres are marked off, and slowly they tick off, as you rise higher up the mountain. I was a little concerned about coming out of the trees as they were giving protection, however with much fortune the clouds covered the sun as I left the tree lined area. It's like a moonscape, very bizarre, just the road trailing up to the monument.

Hard graft and in 1 hours 50 later, I crested the top almost 2000 meters above sea level. The cool fact being its just over a vertical mile from the start point. Others were in all states, knackered, ecstatic, freezing cold as the temperature had dropped. We had a photo and at this point, I seemed to get something in my eye. Well, I started to shed a tear a bit, and got really really emotional. I headed to one side for a few minutes as the enormity of the challenge dawned.

Heading back, I spotted more men, real men, crying it was bizarre, so many of us were so touched by the achievement of getting to the top, and for some reason, it just affected us spiritually in some way. Over in the distance, flashes of lightening were seen, and the clouds rolled in, very dramatic, so dramatic that within a few minutes we realised this was a serious storm heading our way.

From the base of the mountain where it was topping 40 degrees it had plummeted to about 10 degrees, I had every piece of clothing on I had in the van at the top, found a newspaper for my chest, and then headed off down the mountain, Within 500 meters the weather station disappeared, the road was misty, flooding, hail stones, wind, rain, everything. It was a nightmare. The pain of the cold, the pain of the hail meant descending at speed was impossible. We had to shelter. We were fortunate to find a restaurant awning, some hid in people's camper vans, one car stopped and rescued one rider. We hid for about 40 minutes, while it gave its all, and then set off down the mountain. The road was strewn with debris, washed off the mountain side, so descending was pretty treacherous and in fact took about an hour to get down.

Boy was I relieved to get to the hotel. Freezing cold, soaked, hungry. But do you know what. I wouldn't have changed a thing. The whole experience of riding 166 miles in blistering heat, riding a 1 mile high mountain and experiencing the weather as we did, was an experience not to be forgotten.

Click here to see the stats from this stage.