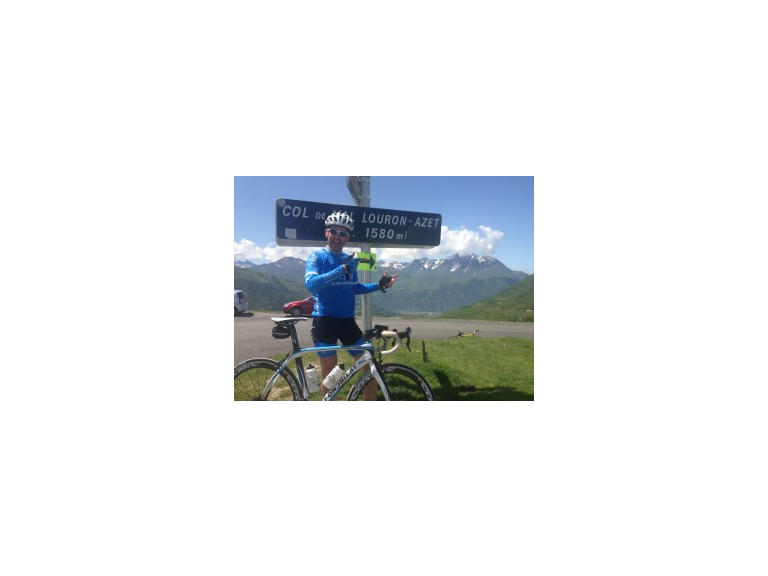 I'm now well into my Tour de France challenge and what an amazing experience it is.

So, why am I doing this mad challenge? My aim is to raise £21,000 for the William Wates Memorial Trust  a Trust which supports charities in the UK that help the most disadvantaged young people, particularly those at risk of being victims or perpetrators of violence.

It would be fantastic if you could sponsor me so that I can raise as much as I can for this fantastic charity  I just want to keep you up to date with my progress, photos and videos.

Here is my latest update:

I’m confused – even having just done the stage I’ve done, I needed to look at the Manual to check what towns we passed and the distance.

Don’t get me wrong, I’m loving it, really loving it, but it’s bloody confusing. We live by stages – we talk about “remember Stage 9 over the 5 mountains” or “remember Stage 11 when we got soaked in the time trial”. Anything else is just a blur.

Today was a great day, but we had challenges. First of all, we had a transfer of about an hour, and then as we were leaving the car park, a bike was spotted. So, where’s Morton? Unfortunately he had disappeared. Now being as we were in a small town, he, unlike most, had gone to the local coffee shop for a drink and of course to use the sit-down facilities. When he came out, we had all left. Well, except four of us who hung around to see where he was and to tow him to the main bunch. He soon came out so we headed off slowly, however he didn’t catch us up, so by 5 miles, we were stopped sat drinking coffee on the roadside in a bar which was serving wine to the other customers, despite it being 8am. Morton had discovered he had a puncture, hence the delay.

We eventually cracked on, but a snapped spoke on Dr Col’s bike put the fear of god up him, so a slower pace ensued until eventually arriving at feed stop 1. Other challenges included Morton’s rear cassette (the cogs at the back) unlocking, which meant the wheel wouldn’t go round – definitely his unlucky day today. We called the service back-up and they supported. Other delays included finding a a great restaurant selling wonderful ice cream and showing the Tour de France so we lost so much time there. Please click here if you’d like to see the stats from today’s stage.

Getting into Lyon was OK – we then had a tour of Lyon, rather random and not one to do by yourself. Especially not when we then landed at our accommodation, which is a little like a prison camp. It has character, let’s put it that way, but I won’t be bringing the family here.

The evening was taken with the briefing for tomorrow. It’s huge. It’s going to be hot, long, very long, and to finish is the climb up Mont Ventoux – oh yes. Plus we need to get back down so it’s over 160 miles tomorrow……………so bed time now.