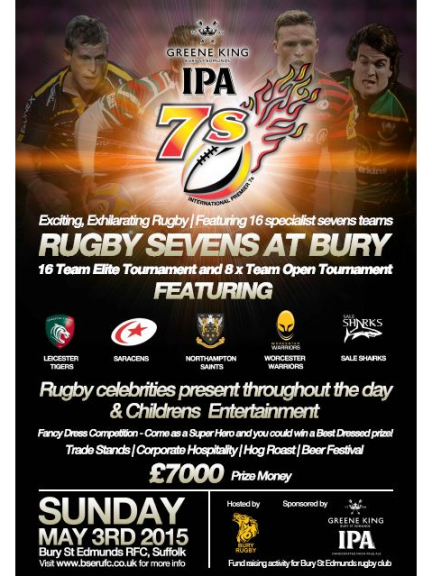 In it’s 7th year at the Greene King IPA Haberden ground, the tournament will once again be packed with top name clubs and international sides competing.

The tournament is sponsored by Greene King and  will be held on Sunday 3rd May 2015 and will feature up to sixteen teams within its elite competition, an eight  side Open competition for local teams including a Bury side comprising several of Bury’s 1st team players;  and a six team Women’s 7s tournament.

“This will be our seventh year of hosting the Greene King IPA 7s  and during that relatively short time it has developed a reputation as one of the premier Sevens tournaments on the circuit attracting some of the best 7s teams in the world”, said Michael Robinson, Bury St Edmunds RUFC’s Club Chairman. “2015 will be a phenomenal year for rugby with the World Cup being played on British soil and interest in the sport at an all time high. 7s rugby has even higher fast paced action and thrills and spills than the full fifteen game, which is why it makes such as great spectator sport. Last year we had in excess of 2500 spectators join us for this tournament and we expect that to rise this year. It’s a fantastic opportunity for sports fans to watch some of the top players in our game right here in East Anglia.

Alongside the tournament, the club will once again be hosting a beer festival throughout the weekend kicking off on Friday 1st May from 7pm.

Entrance for the event, which includes food, drink and merchandise stalls, children play activities and family friendly competitions are £10 per adult, £5 for U15s and free for Under 5, with discounts for members of the Armed Forces, pay at the gate on the day.