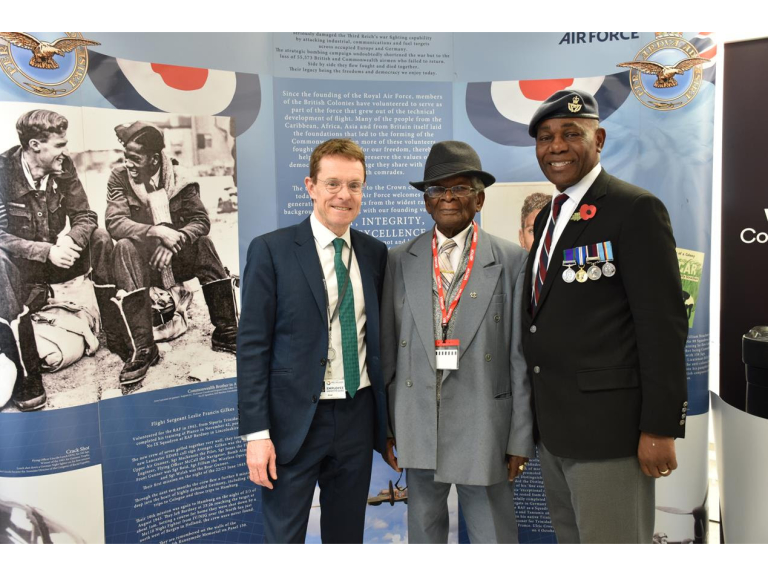 The West Midlands Combined Authority (WMCA) hosted the launch of a charity appeal which aims to raise £500,000 for a commemorative monument for Caribbean Armed Forces personnel at the National Memorial Arboretum.

The National Caribbean Monument Charity (TNCMC) has already commissioned Martin Jennings to produce a design for a tribute to Caribbean personnel who served in many conflicts – but needs to raise money to get the monument built and maintained.

Sculptor Jennings, who also designed the Mary Seacole statue in London, has created a monument including figures representing Caribbean military personnel, the Armed Forces crest, and an inscription which reads: “This memorial pays tribute to Caribbean personnel of all ethnicity who serve and have served the British military and its Merchant Navy.”

TNCMC wants the statue to be placed at the National Memorial Arboretum as there is currently no national monument or statue dedicated to the service of Caribbean personnel.

Donald Campbell from TNCMC, who himself served in the RAF for 36 years, said: “This monument will celebrate the 18 British Caribbean Islands from where thousands of Caribbean men and women joined up to help the Mother Country and still remain a backbone in today’s British military - yet we do not have a national monument to recognise their contribution.

“This monument will provide an inter-generational link that has so often been forgotten.”

The WMCA helped TNCMC by hosting the launch event with potential donors at the combined authority’s offices in Birmingham on Valentine’s Day, February 14.

Mayor of the West Midlands Andy Street said: “Sixteen-thousand Caribbean service personnel willingly signed up to fight for Britain, and thousands lost their lives fighting for our freedom.

“This monument will help to provide a lasting reminder of their dedication and sacrifice in serving Queen and country at a time when Britain needed them most.

“We’re very happy to help support TNCMC as it tries to raise funds for a monument which will go some way to recognising the contribution our Caribbean communities have made to the armed forces over many years.”

The National Memorial Arboretum, in Alrewas, hosts a number of commemorative monuments and statues for armed personnel. And in November 2018, a bronze 10ft statue of a Sikh solider, named The Lions of the Great War, was unveiled in Smethwick to commemorate the service of people from the Indian subcontinent who fought for Britain in World War I.

Eleanor Smith, Labour MP for Wolverhampton South West and patron of the National Caribbean Monument Charity, said: “It is marvellous that we are launching this charity and are on the journey to building a monument which honours the sacrifices and contributions made over centuries by Caribbean military personnel.

“This monument is important because it links the past to the present. It will enable people to remember and respect those from all the Caribbean Islands who served in the British Armed Forces. It will be an important source of information for future generations in understanding the contribution made by past generations to our safety and way of life.

“There is a strong fundraising plan in motion and I confidently look forward to attending the monument’s unveiling at National Memorial Arboretum in the near future.”

A JustGiving page has been set up to manage donations to The National Caribbean Monument Charity. For more information, or to donate, please visit: https://www.justgiving.com/nationalcaribbeanmonument