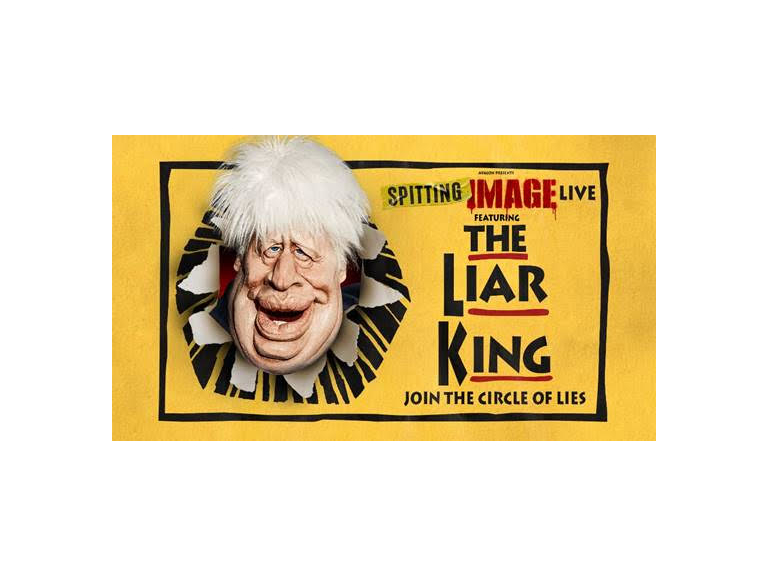 Foley, whose Olivier nominated production of Upstart Crow returns to the West End this Autumn, said, ‘It’s not often you get to direct Tom Cruise, Stormzy, Boris Johnson, Beyonce, and Her Majesty the Queen all on the same bill... I’m thrilled to be part of the team bringing this iconic British comedy to the stage - in particular to be working with the inspiring Roger Law, original co-creator of this legendary show. From the scathing to the silly, from brutal political satire to sending up celebrity, Spitting Image has always fearlessly pointed at the Emperors of our society and gleefully stripped them naked. This live show will be no different…'

Whilst Boris and his chums level themselves ever upwards to the sunlit uplands, Spitting Image are preparing to level them down to size in a theatrical extravaganza like no other. Join the circle of lies and see the puppets live on stage for the first time ever. Witness a monstrous cast of stars including The Liar King himself, Boris Johnson. Plus Tom Cruise & Michael Gove (together on stage for the very first time), Adele, Tyson Fury, Harry & Meghan, Stormzy, Beyoncé, Vladimir Putin & Xi Jinping, and many more.

Written by Al Murray, Matt Forde and Sean Foley. Directed by Birmingham Rep’s Artistic Director, double Olivier Award winner, Sean Foley and produced by Avalon and Birmingham Rep, this is sure to be the must-see theatrical spectacular of 2023.

Spitting Image co-creator Roger Law added: “Birmingham Rep and Spitting Image have been receiving numerous calls from friends of Boris Johnson pleading with us not to cancel his puppet from our theatre show, ‘The Liar King’, opening in the New Year.  Recent events made it doubtful if either Boris or Prince Andrew would be treading the boards… but after careful consideration we are now able to reassure them both that their puppets are the kind of heartless b*stards essential for our kind of refined satire.  Boris’s friends please note, and report, to him that, YES, his puppet will appear wearing a gilet jaune yellow jacket pretending to be useful!”

The Way Old Friends Do (17 Feb-4 Mar 23) will receive its world premiere at The Rep ahead of a UK tour. In 1988, two Birmingham school friends tentatively come out to one another: one as gay, the other - more shockingly - as an ABBA fan. Nearly thirty years later, a chance meeting sets them on a brand-new path and they decide to form the world’s first ABBA tribute band - in drag! But can their friendship survive the tribulations of a life on the road which includes platform boots, fake beards and a distractingly attractive stranger?

Kit de Waal, Birmingham born and bred writer of My Name is Leon, together with Dean O’Loughlin, will collaborate on a new play for future production about the visit of Malcolm X to  Birmingham in 1965. In an extraordinary and little known visit - only nine days before his assassination in New York - Malcolm X had answered the call of local Black and Asian Civil Rights activists to come and assist them, after the racist election campaign run by the Conservative candidate in Smethwick had stirred racial hostility.

New additions to the 2022 programme for Autumn include Ballet Black (28 Sep 22) which will perform Black Sun and Say It Loud. Apphia Campbell will perform Black Is The Color of My Voice (9-11 Feb 23), the extraordinary show about Nina Simone, returning after a sell out run in The Door earlier this year. Additionally there will be two comedy nights in The Door in October - Desi Central Comedy Show (15 Oct 22) and COBO Comedy Shutdown (22 Oct 22) plus a film screening of The Influence of Shakespeare on Bollywood (20 Oct 22).

Foley added: “From Nina Simone to Tartuffe, and from Ballet Black to Nativity The Musical, the Autumn Season represents a true diversity of theatrical. I’m delighted to be starting the new year in ‘23 with two world premiere comedies, and am thrilled that Tom Cruise has agreed to follow in the footsteps of Sir Laurence Olivier, and make his theatrical debut at The Rep.”

Also announced today, applications open on 4 July 2022 for next year’s Sky Comedy Rep. Now in its second year, the programme, (Patron Dame Julie Walters),  is a partnership between the Rep and Sky to develop new comedy writing, focussed on uncovering talent from under-represented communities. Following on from the success of the first year, eight writers will be selected to develop their scripts leading to performances in May 2023. The writers will have mentors from the best in the comedy business, previous mentors include Meera Syal & Guz Khan.

Tickets for all of these new productions are now on sale to members with general booking opening at 12pm, Thu 30 Jun. To book tickets visit Birmingham-rep.co.uk, call 0121 236 4455 or visit the box office during opening hours.*