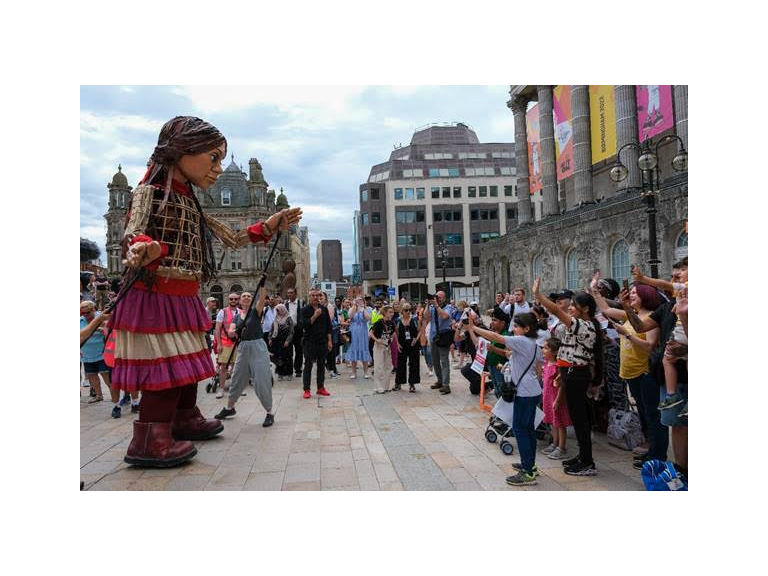 Ahead of her public appearance, Amal visited a Birmingham-based Refugee Hotel on Wednesday evening before heading to Abbey Catholic Primary School in Erdington on Thursday morning where pupils welcomed her with songs, artwork and performance.

On Thursday afternoon, Amal then continued her journey through Birmingham’s city centre, beginning outside the Council House in Victoria Square before walking across the city centre, through Chamberlain Square, concluding in Centenary Square outside The Rep.

Along the route, Little Amal stopped to meet different ‘families’ made up of relatives, friends and community groups for a special photo portrait by acclaimed Birmingham photographer, Dr. Pogus Caesar.

Introducing Little Amal to Birmingham, the various community groups from across the region that greeted her included; Journey Asylum Seekers Group, Women & Theatre, City of Sanctuary schools, Stories of Hope and Home, Saathi House, RESTORE and Refugee Action. At the conclusion of Little Amal’s walk through Birmingham she will was presented with the flag of Birmingham, signed by various participants from the past two days.

Birmingham-based photographer Jaskirt Boora document her journey through the city.

Rachael Thomas, Executive Director at The Rep said; “We were extremely honoured to produce Little Amal’s first-ever visit to Birmingham’s city centre, marking World Refugee Week. Little Amal is not only an arresting and beautiful moment for the public to be part of but a rousing symbol of human rights that is so relevant in our world right now. It was a wonderful moment introducing Amal to the ‘families’ that make up our rich and vibrant city.”

Since her initial 8,000km journey from Syria, Little Amal, a 3.5 metre puppet of a 10-year-old Syrian girl refugee, has become an international symbol of human rights. She has come to represent the millions of refugee children including those who have been separated from their families.

One year on from leaving Syria and 5 weeks after her visit to Ukraine, she will mark World Refugee Week by visiting 11 towns and cities across England, including Birmingham, meeting old friends and making new ones. Amal will be sharing a message of resilience and hope with anyone who has been forced to leave their homes.

It takes three puppeteers to operate Little Amal, a stilt walker whose legs become Amal’s and who also animates her face, one puppeteer on each of her arms. There is a team of ten puppeteers, some from refugee backgrounds. The puppet is crafted from moulded cane and carbon fibre.

Little Amal represents the millions of refugee children separated from their families. Her urgent message to the world is “Don’t forget about us”.

The Walk is produced by David Lan, Tracey Seaward and Stephen Daldry for The Walk Productions in association with the Handspring Puppet Company and led by artistic director Amir Nizar Zuabi.