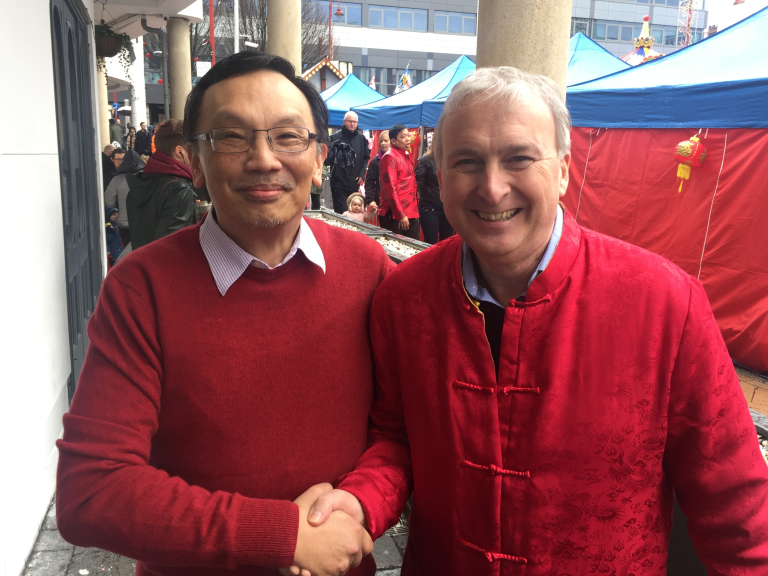 On hand to guide the Leader of Birmingham City Council through this vast cultural array of celebrations was Dr Yeow Poon, Chair of the Chinese Community Centre in Birmingham and winner of the Public/Third Sector  Category at the 2018 Midlands Leadership Awards run by the Business Desk.  Dr Poon, described as "a long term visionary with an inclusive and collaborative leadership style" by the Midlands Leadership Awards has contributed to positive change in the West Midlands.  He is President of England China Business Forum, Secretary of Birmingham Business Focus and Treasurer of Arts in the Yard.

"The England China Business Forum", said Dr Poon, "welcomes people who are interested in working, sharing and collaborating with others on business activities between China and the UK.  The Forum was launched in Birmingham in 2013 and since then has organised regular events on doing business and making investment to and from China".

In 2016 the Chinese Community Centre celebrated it`s 40th anniversary at Villa Park in Birmingham to mark the momentous milestone.  From humble beginnings, as a small desk in a Sparkbrook office, the Community Centre was founded in 1977 to assist the newly established Chinese community in settling and becoming a part of Birmingham.  "We are now situated in Digbeth", said Dr Poon, "and we are a hub of activity which play host to cultural performances, celebrations and events for all groups in the community.  For the next 40 years we will continue to not only serve the Chinese community but also collaborate with other community groups for a more prosperous, inclusive and vibrant Birmingham".

Dr Yeow Poon was one of the initiators of China West Midlands 2020 which aims to strengthen cross cultural connections between China and the West Midlands in business, education, culture, arts and sports.  "I spoke at a British Council event recently", said Councillor Ian Ward "about Birmingham`s standing as a global city with a long term track record of successful international partnerships.  No relationship better embodies our status as a global city than our ever burgeoning ties to China.  The region`s resident Chinese population and the many Chinese investors who see the huge potential of Birmingham and the wider region are now major players in our current transformation."

The Leader of Birmingham City Council believes much has changed since Birmingham entered into a sister city relationship with Changchun in 1983.  China has emerged as a global superpower to rival the biggest economies in the world.  "China is far more outward looking", said Councillor Ian Ward  "and plays a far greater role on the international stage.  It also has stronger links with the city of Birmingham.  Our sister city relationship with Changchun now sits alongside partnerships with the old Chinese capital city Nanjing and the manufacturing powerhouse of Guangzhou.  Those partnerships mean more homes,  jobs and regeneration for the people of Birmingham".

Major projects in the city include:

(2) An added £470 million for the city`s economy through the Smithfield Development with 3,000 jobs

(3) 10,000 jobs with the Peddimore industrial development and a £350 million boost to the economy

The Leader of Birmingham City Council believes that property and infrastructure projects are only part of the story.  "Our friendship is built on far more than money and investment opportunities", he explained.  "For many years now Birmingham`s Chinese community have played an active role in the civic and cultural life of the city.  Thanks to the efforts of Chinese Brummies we continue to strengthen our links with China.

For more information on China West Midlands 2020 go to www.chinawestmidlands.com