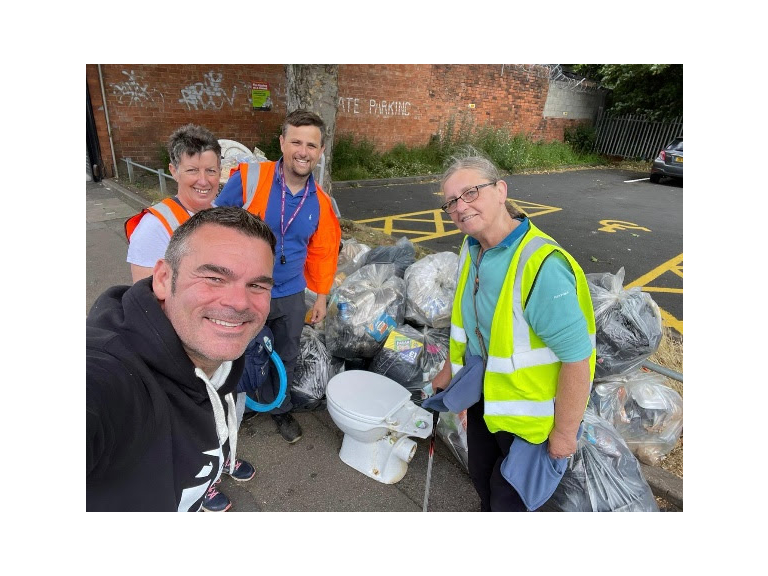 Working alongside Birmingham, Coventry, Dudley, Sandwell, Solihull, Wolverhampton and Walsall councils, they mobilised an army of volunteer #LitterHeroes to clean up the region’s parks, streets and waterways over 23rd, 24th and 25th June and beyond.

As well as polluting our streets, parks and countryside, litter harms wildlife, domestic pets and cattle, and costs us, as a nation, nearly £1 billion a year to clean up.  As the eyes of the world turn to the region for the upcoming Commonwealth Games, we want to make sure it is looking its best.

The weekend of action was launched with a clean-up involving Lanesfield Primary School’s Eco-Club and the Mayor of the West Midlands, Andy Street, on Friday 24th June at Wolverhampton’s Hilton Park.

On the same day, staff from 21 McDonald’s stores around the region took part in a series of litter-picks and We Clean Ltd donated the time of 15 staff to the campaign to tidy up Paradise in Birmingham.

This was followed by a series of family-friendly community litter-picks on Saturday 25th June, delivered by each local authority, Keep Britain Tidy and of course grassroot groups.

Together, we removed litter from local parks, streets and waterways. All equipment was provided and we welcomed a diverse cross section of community spirited people to these events, from first-time litter-pickers to experienced #LitterHeroes.

We are so grateful to local residents, businesses and community groups that stepped up and signed up to the campaign, either taking part in their own litter-pick or joining an organised event.

A special thanks to Lanesfield Primary School who were joined by The Mayor for the launch event, at a park local to the school. The school's Eco-Club led the way with 1 hour of litter picking and lots of excitement from the children. The school have kept the litter picking equipment and the Eco-Club are keen to set up a weekly litter pick around the grounds now.

Wright Restaurants heroic Clean Up efforts on Friday 24th June were as follows:

Local groups were outstanding in their contribution including The Cotes & Trees Community Group in Coventry, Litter Watch in Sandwell, Love Solihull, Wombles of Darlaston, and Tabernacle Baptist Church

The range of litter collected was extraordinary including a hidden knife safely removed, drug paraphernalia, broken glass in the road, a large tyre and two wheelie bins filled with cans, bottles & cardboard to be recycled.

Keep Britain Tidy’s Chief Executive, Allison Ogden-Newton OBE said: “The eyes of the world will fall on the Midlands as the much-anticipated Commonwealth Games takes place, and we want to make sure the region is looking its best for competitors, residents and visitors.

“We need the public’s help ahead of this important occasion. We want to encourage everybody to take pride in the region by helping to make a difference in neighbourhoods, parks and open spaces.”

Andy Street, Mayor of the West Midlands, said: "It was great news to see local heroes from across our region stepping up to take part in The West Midlands Great Clean Up - a wonderful grassroots effort to galvanise action to instil community pride in the place we all call home and get the West Midlands looking its best ahead of the Commonwealth Games this summer.

"I made an election commitment to utilise my convening power as Mayor to help clean up our region and I'm so pleased that - in conjunction with Keep Britain Tidy - we are staying true to that promise.”

Doug Wright, local McDonald’s franchise owner, said: “I’m pleased to be able to support The West Midlands Great Clean Up with staff at our McDonald’s restaurants across the region stepping up to contribute to this grassroots effort to help the West Midlands look its very best ahead of this summer’s Commonwealth Games.

“This region has been very kind to me over the years and its wonderful local residents have been loyal customers at our various McDonald’s outlets here in the West Midlands. I consider it a privilege as well as a duty to involve my business in such an important cause.”

Special thanks to Clean Up Sponsors:

Keep Britain Tidy is a leading environmental charity that cares for the environment on your doorstep. We work to eliminate littering, reduce waste and improve public space. We run programmes including Eco-Schools, the Green Flag Award for parks and green spaces and the Blue Flag/Seaside Awards for beaches. To find out more about Keep Britain Tidy, our programmes and campaigns visit www.keepbritaintidy.org.