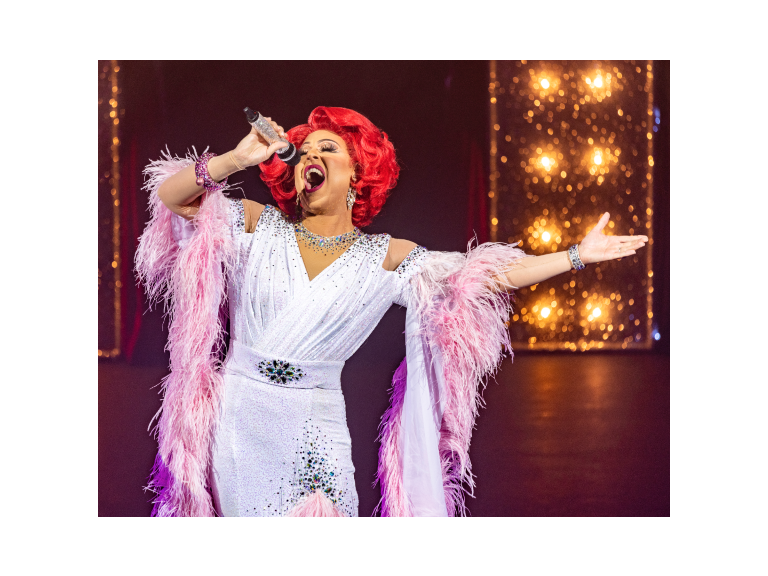 Move over hanging gardens of Babylon, Egypt’s pyramids step aside, because there’s a new wonder of the world in town - La Voix! Officially the UK’s Funniest Red Head, La Voix is hot footing it across the UK with her live band in a brand new show for 2022 - The Eighth Wonder! From January and Will visit The Old Rep Theatre in Birmingham on Saturday 5th February 2022.

Most famously known for making it to the finals of Britain’s Got Talent, La Voix has gone on to be a regular on both stage and screen working closely with many big stars including Mickey Rooney, Cilla Black, Pamela Anderson, Brigitte Nielsen, Ruby Wax and many more -  also appearing in Ab Fab The Movie alongside Joanne Lumley and Jennifer Saunders.

​When the feisty flame-haired phenomenon isn’t giving it out on her hilarious talk show on BBC Radio, the award-winning star and Royal Family favourite is busy performing for the rich and famous. She has twice

entertained Princes William and Harry at their New Year's Eve party and topped the bill at Sir Ian McKellan’s 80th birthday bash who said: “La Voix’s impersonations are surpassed only by her own cheekily entertaining personality. A genuine one-off!”

Having caught the imagination of theatre goes across the globe La Voix is currently representing the UK in on globally televised competition Queen of the Universe from Paramount Plus  - soon to air in the UK.

For the past 10 years in her stage shows the vivacious performer has been taking on the big ‘divas’ and making them her own, her uncanny ability to switch between the vocal styles of Tina Turner, Shirley Bassey, Liza Minnelli, Judy Garland or Cher with the click of a finger leaves the audience mesmerized, these spine-tingling vocals interspersed with a razor-sharp saucy wit brings audiences to their feet time and time again, whistling for more at every show.

‘When I Grow up I wanna be La Voix ‘- Dawn French

‘A masterclass in comedy timing’ - The Times

La Voix brings fans and first-timers a unique evening of entertainment - forget everything you think this might be.  In the company of a true legend, you’re guaranteed to be up on your feet with music and laughter and a whole lot of glamour.

La Voix says “I can’t wait to meet you all on my 2022 Eight Wonder tour so dig out your sparkly shoes and join me for a night of music, song and lots of laughs – after the last couple of years it’s just the tonic – you bring the gin!”

The perfect night out for theatre, comedy and musical fans! La Voix’s shows are not to be missed!  Find out more about the tour and book your tickets at www.lavoix.co.uk  or www.oldreptheatre.co.uk More tour dates to follow.

Stafford Literature Festival
Sign up for offers
Sign up for what's on guide
Popular Categories
By clicking 'ACCEPT', you agree to the storing of cookies on your device to enhance site navigation, analyse site usage, and assist in our marketing efforts.
For more information on how we use cookies, please see our Cookie Policy.