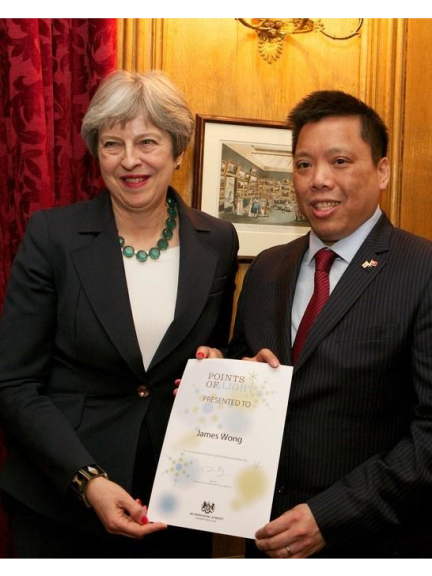 James Wong, Chair of the Chinese Festival in Birmingham, is in a celebratory mood.  The Chinese New Year celebrations in Birmingham have become one of the biggest in Europe. He has also  received the Points of Light award  from Prime Minister Theresa May last year  for his charity work for the Chinese elderly.

"It`s great to see how the city comes together  to celebrate Chinese New Year here in Chinatown.  We have been extremely busy throughout the day and would like to thank all those involved,  especially our sponsors.  The dream of celebrating the Spring Festival to other areas of Birmingham became a reality last year and I`m extremely pleased to see it continued to this year`s activities.  Special thanks must go out to Birmingham Hippodrome for co-producing the event.  We are very fortunate to be working with them once again."

Chinese New Year is the largest event in the Chinese calendar and 2019 is the biggest event to date.  ""With every year" explained James Wong "the Birmingham celebrations have grown in popularity.  The 2018 festival attracted over 30,000 people to Chinatown and Southside.  We are proud to extend the celebrations this year to other parts of Birmingham including the financial and shopping districts".

These new additions would not have been possible without the support of the Southside community in Birmingham and those further afield.  Three years ago Birmingham City Council announced that it was unable to fund the festival due to ongoing budget cuts.  This news did not dampen spirits and the entire community came together to support and raise the funds needed to put on this spectacular festival.

"In Chinese culture the pig is a symbol of wealth" said Councillor Yvonne Mosquito, Lord Mayor of Birmingham.  "It`s a symbol of good fortune and prosperity.  As we mark the start of the Year of the Pig, let us also celebrate the many contributions made by Birmingham`s Chinese community that enrich our lives in this great city.  The strong and vibrant Chinese community bin Birmingham has added hugely to the cosmopolitan culture of our city. It is a major source of pride to the people of Birmingham that our Chinese New Year celebrations are among the biggest in Europe". Chinese people use the lunar calendar for their festivals and is based on the time the moon takes to orbit the Earth.  The Western calendar is based on the time it takes for the Earth to orbit the sun.  The festivities last for 15 days and is the most important festival within the Chinese culture.  Similar to Western star signs, the Chinese have their own Chinese zodiac.  Each lunar year is related to a zodiac animal and recurs on a 12 year cycle.  The New Year signifies both a new beginning and the beginning of spring.  Chinese New Year is always a reminder of more colourful days to come in the cold and dark days at the start of the year.

"It is my great pleasure to wish everyone a very Happy New Year of the Pig", said Andy Street, Mayor of the West Midlands.  "The West Midlands is proud to have become a home and a hub for the Chinese community.  While we celebrate the New Year it is right to think of and be proud of the contribution of the Chinese community to our region.  Trade with China is strong and bolstered by the advanced manufacturing sector".

West Midlands businesses offered support to mark 2022 with a move towards net zero
Sign up for offers
Sign up for what's on guide
Popular Categories
By clicking 'ACCEPT', you agree to the storing of cookies on your device to enhance site navigation, analyse site usage, and assist in our marketing efforts.
For more information on how we use cookies, please see our Cookie Policy.