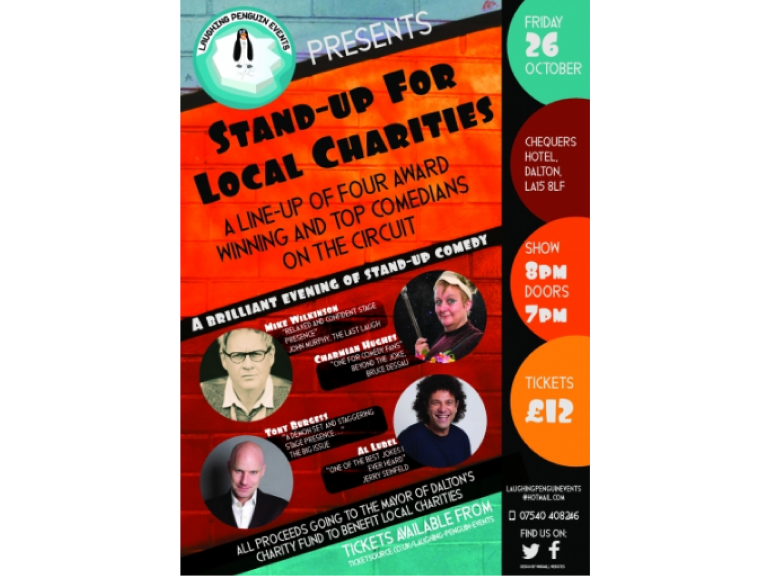 Get your weekend off to the perfect start and enjoy a side splitting night of comedy this Friday.

Laughing Penguin Events (the people behind Barrow Comedy Club - The Duke of Comedy and The Comedy Mill - Ulverston) are proud to announce that the next Stand-up For Local Charities comedy night takes place on Friday 26th October at Chequers Hotel, Dalton.

There’s a fantastic night of comedy to look forward to with four top headlining and hilarious comedians from the circuit providing the laughs and all proceeds from the evening will be going to the Mayor of Dalton's charity fund to benefit local charities.

The line-up for the evening is:

A professional comic for over 10 years, Mike has supported such comedy greats as Peter Kay, Johnny Vegas, Ross Noble and Jason Manford.

Charmian studied clowning under Philippe Gaulier and Theatre de Complicite but unable to keep to the Mime Vow Of Silence, ran away to play stand-up clubs throughout the nation, entertaining everyone, from members of the House of Commons to Lifers in prison (not to be confused)

"One for comedy fans" - Beyond the Joke, Bruce Dessau

Tony was the winner of the prestigious City Life comedian of the year, came runner up in So You Think Your Funny and was nominated for best stand up and writer at the North West comedy awards. He is also a founder member of the topical MEN at work team at the Comedy Store in Manchester, one of the regular comperes at the long established Frog and Bucket Comedy club and has supported household names including Jenny Eclair and Johnny Vegas on National Theatre tours

"…extracts the comic and absurd from difficult situations…" - The Guardian

"A demon set and staggering stage presence…" - The Big Issue

Al Lubel trained as a lawyer, but after passing his bar exam launched his parallel career as a stand-up. Eventually he quit law, and within a year he won $100,000 on the TV talent show Star Search. He became one of the last comics to appear on The Tonight Show with Johnny Carson, and has been on with his successor Jay Leno several times, too, including the recurring character of NBC Legal Analyst.

"One of the best jokes I ever heard" - Jerry Seinfeld

Doors open at 7pm with the show starting at 8pm. Following the comedy there will be live music from the amazing and brilliant Fiona Music in the Lakes.

So what’re you waiting for? Get your tickets booked, help support local charities and prepare yourselves for the best Friday night you’ve had in a long time.

Tickets are just £12 and can be bought by clicking here… https://www.ticketsource.co.uk/laughing-penguin-events?fbclid=IwAR36lPuTuzyw3zXWQZptaP7vjIZEJAcIRHR5wSDQMu8ptS8a59kyUPEz4L4