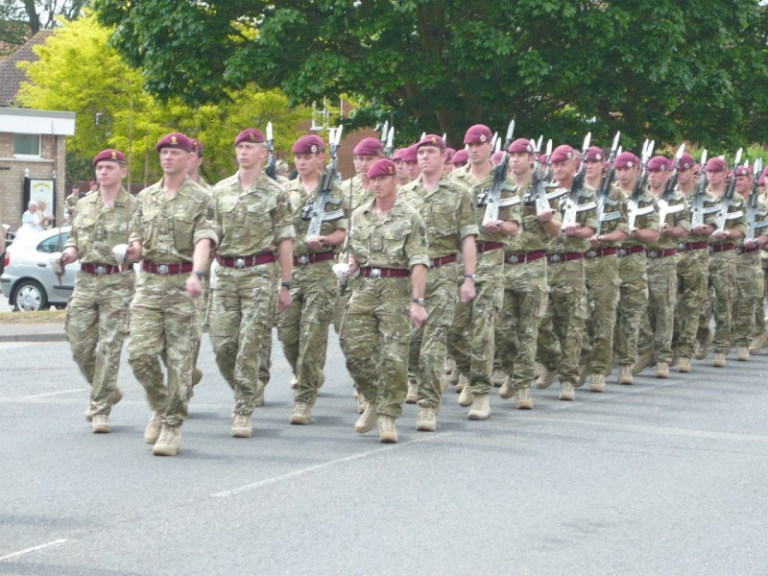 The freedom parade, led by The Band of the Parachute Regiment, will see some 180 soldiers march through the town ‘with swords drawn, bayonets fixed, drums beating, bands playing and Colours flying’.

The regiment was granted the Freedom of Woodbridge in 2006 and today's parade will be the fourth time it has been exercised. The history of such parades is uncertain, but it seems to date back to feudal times when militias who had won the trust of local people were granted the right to march through a town with their weapons.

The musical ceremony dates back to the early years of organised warfare when the beating of drums and the parading of guards heralded the closing of camp gates and the lowering of flags at the end of the day.

23 Engineer Regiment (Air Assault) provides, close and general engineer support to 16 Air Assault Brigade. The Regiment is held at a Very High Readiness and regularly called upon to deploy on operations across the globe. Insertion can be by parachute, helicopter or fixed wing aircraft.

Based in its flagship barracks (ROCK BARRACKS) just outside Woodbridge in Suffolk, the Regiment consists of 2 parachute squadrons and a headquarters and support squadron, all of which are air assault capable.

Woodbridge has very close links with the Regiment and it was given the Freedom of Woodbridge in 2006.

In September 2009 the Regiment asserted their rights to the Freedom of Woodbridge and paraded through the Town to mark their successful return from Afghanistan earlier that year.

On 19th May 2011 the Regiment again asserted their right to the Freedom of Woodbridge and paraded through the Town accompanied by the Corps of the Royal Engineers Band, marking their return from a six month posting to Afghanistan earlier in the year. This time a formal Drumhead Service was also held on the Market Hill, led by the Regiment's Padre, Andrew Earl.