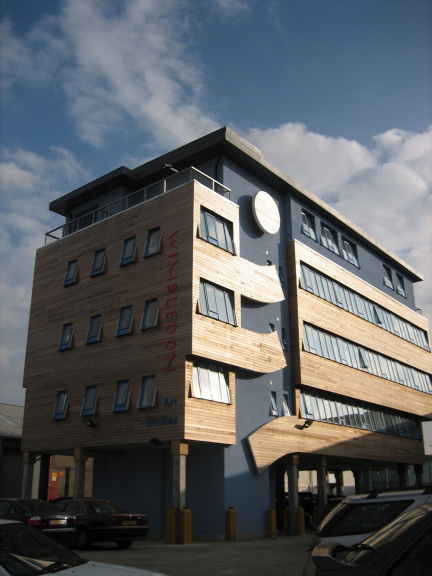 Wimbledon Art Studios is one of the largest creative studio complexes in the UK. Housing some of the most creative artists in London, the studio's doors are open twice-yearly for the highly successful Open Studio Art Shows which attracts thousands of buyers and exposure to galleries and collectors.

Wimbledon Art Studios is one of the largest single site art studio complexes in Britain. The unique creative community is home to 227 individual studios providing a professionally managed create environment for over 240 artists in South West London.

The artists produce work across almost every discipline including painting, ceramics, weaving, photography, furniture making, textile design & sculpture, with a high percentage of them working professionally, full time. Many of the emerging artists juggle their studio time around full or part-time jobs and often work late nights or weekends to pursue their interests.

The twice-yearly, highly successful Open Studio Art Shows are the only time that Wimbledon Art Studios doors are open to the public and it's only then that you get some sense of the scale of the place.

Over 200 artists open their studio doors for 'the most affordable festival style art show in London'. The public can browse and buy directly from artists in their working studios. The event attracts over 4500 people and hosts a range of entertainment, workshops and competitions.

First opened in 1993, Wimbledon Art Studios is now a recognised creative community spanning well-established and emerging artists. Art Studios have traditionally been established in rundown buildings awaiting either demolition or redevelopment with landlords exploiting this temporary opportunity to offer studio space for a few months or in luckier cases, a year or so.

The Red Studios first opened in 1993 within a working paper warehouse that was shared by six artists renting art space. Now, the original warehouse consists of over 173 studio spaces spanning three floors.

Wimbledon Art Studios alternative philosophy is to help artisans towards becoming independent and the resident artists benefit from an Artist Career Development Programme offering lectures and seminars on topics ranging from writing artists statements to grant applications to sales skills. Many of the artists at the studios tend to stay long term and have the opportunity to become a part of a ‘community’, in what otherwise could easily be a very isolating career.

© The Best of Wimbledon and Merton

200 artists open their studio doors to the public to ‘the most affordable festival style art show in London’. Browse and buy directly from artists in their working studios. Competitions, workshops, music,... Read article

Read all
Latest Tweets
We need your approval to show you feed from Twitter.
Have you seen...?
Call
Website
Email
Review
By clicking 'ACCEPT', you agree to the storing of cookies on your device to enhance site navigation, analyse site usage, and assist in our marketing efforts.
For more information on how we use cookies, please see our Cookie Policy.