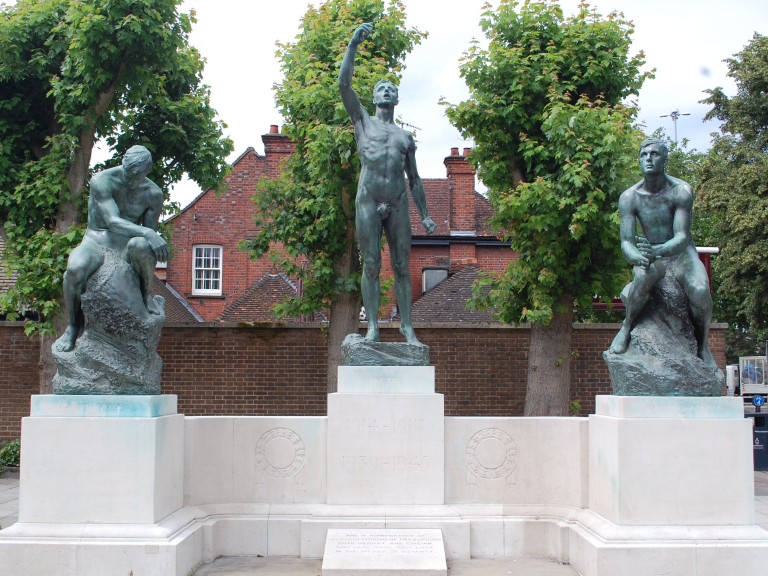 Watford Peace Memorial’s heritage listing has been upgraded from Grade II to Grade II*, which means it is of greater significance nationally.

Watford Peace Memorial was designed in 1928 by the prominent sculptor Mary Pownall Bromet, a former pupil of Auguste Rodin. The sculpture features three figures known as the Fallen, the Wounded and Victory. The Historic England report recommending the upgrade noted: ‘The Watford Peace Memorial is a simple yet striking and unusual example. Its high quality bronze sculptures and unusual subject matter further increase its poignant impact.’

Elected Mayor of Watford, Dorothy Thornhill, said: We’re pleased Historic England has recognised the significance of our peace memorial, and the new classification of Grade II* means the sculpture can be protected for future generations to appreciate.”

Grade II* listing may be granted to memorials with an above-average level of special interest: they may be highly unusual in form or symbolism, or of a high level of artistic accomplishment. According to the Historic England report, Watford Peace Memorial was granted Grade II* listing for:

The two seated figures were not initially produced for the memorial but the artist offered the plaster models they were cast from to the Peace Memorial Hospital and a public fund was raised to have them cast in bronze for the memorial.

The memorial was relocated outside Watford Town Hall in 1987.

Mary Pownall Bromet was a British sculptor. She was tutored by Auguste Rodin, exhibited at the Royal Academy and throughout Europe, and became an influential sculptor of the early 20th Century. She was a President of the Society of Women Artists and an Associate Member of the Royal Society of British Sculptors. She and her husband were Watford residents for nearly 30 years and Hertfordshire residents for longer.