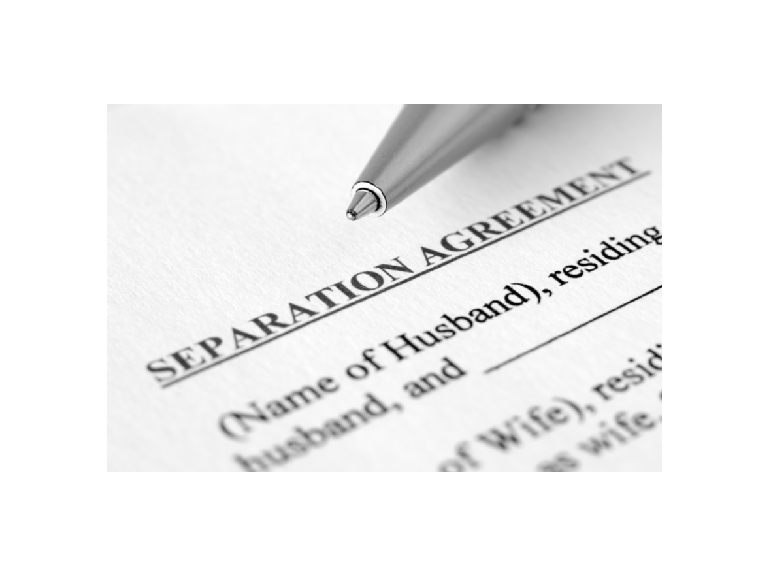 This article is intended as an overview of the contents of a Separation Agreement. If you are separating from your partner and are trying to decide whether a separation agreement is appropriate, this article will give you an idea of the practicalities of the agreement and the types of assets and responsibilities it aims to formally divide between you and your partner.

If you do decide that a separation agreement is for you, you are advised to seek independent legal advice in the drafting of the agreement.

In order for the agreement to be taken as binding by both yourselves and the Courts it is essential that it clearly states the principles under which you are making the agreement. This is where you acknowledge that the agreement is a true reflection of your intentions. There are three basic principles that make a separation agreement likely to be upheld in court:

You are entering into the agreement voluntarily, neither party should feel under pressure or duress to agree to the terms, as this would imply it was not an agreement.

Thirdly, that both parties have made full disclosure of all their assets and responsibilities – this is essential to end up with a fair agreement. For example the terms of the agreement can be deemed as unfair if it is later discovered that one party has a financial income or burden even which they have not revealed to the other party.

And finally, that it is a full and final agreement where both parties accept that it encompasses all things relevant to the separation and agree on the settlements detailed within it.

The agreement should set out what is to be done with the property you have been living in. For example, you may need to take steps to sell your house or flat and divide the proceeds from the sale according to the agreement. Alternatively one party may pay the other to gain sole possession of the property, or you may wait to sell until your children have matured. The agreement also addresses how any ongoing expenses associated with the process are to be split. Tax implications are relevant where one party leaves the principal residence to live elsewhere, capital gains tax becomes payable after a period of 3 years, so obtaining the advice of an accountant in such circumstances is crucial.

Here you decide who keeps what, and a time-frame for collecting personal items. You also agree to care for items until they are collected.

This includes actual or potential assets and businesses. Generally this section sets out the amounts of money to be transferred in order to achieve sole ownership of assets by each party. For businesses, the party leaving the business agrees to completely disassociate themselves from the business, giving up any title, business contacts, intellectual property etc. It is very important for those who may have established a business, perhaps entirely by themselves, to note that it is nonetheless open to share/division in such a situation.

Here the agreement sets out any payments – lump sum or periodic – which will go to a partner for their maintenance and/or for that of any children. There could be a clause here which allows for inflation in living costs.

This section ensures that both parties will do their utmost to ensure they both maintain the best possible relationship with their children, for example, by agreeing to avoid criticising the other partner to the children or obstructing their relationship in any way. The time that each partner is to spend with the children can also be set out herewith.

Here it is agreed if there is to be a lump-sum payment to either partner: the amount, the time-frame and acknowledgement that this is a final payment.

If this agreement is intended as a precursor to divorce, this section ensures that both parties agree to this intention and the time- scale for proceedings. It also states that they intend use this agreement as a basis for their divorce settlement. The Courts are always striving to reduce costs in family proceedings and minimize the use of the ever-stretched Court time. If a couple have successfully agreed to a division of their family assets and the agreement has worked well for a period of two or so years, the best way forward would be to remove the Court’s discretion when a properly prepared separation agreement is presented to it.

There is no doubt the timescale for finalising financial affairs at the end of a marriage can be significantly reduced when a separation agreement has previously been drawn. More and more people are choosing to adopt the route of obtaining a separation agreement and, whilst a gentleman’s agreement rather than something enforceable in law, the agreement tends to make each party feel more comfortable and allows for the divorce to take place when the tension has subsided a little.

When you do eventually divorce, the separation agreement, if it has worked, can form the basis of the Consent Order application and the District Judge is notified of the parties’ long term agreement and the fact that it has worked well.

As aforementioned, a separation agreement is not binding in the same way as a commercial contract, the Court still has a complete discretion to make an order in different terms to any previous agreement. However, when or if you do have to go to Court, it is likely that the judge will make an order (which will be binding of course) in the terms of your agreement provided:

The extent to which a judge will stay with the agreement reflects the level of his acceptance of the above three points.

If one of you is in breach of the deed of separation and the other goes to court to enforce it, the judge will make an assessment as described above and will enforce the agreement to the extent that he feels is right.


Becoming the Women’s Lawyer has been my goal for several years. With the recent changes in the legal system and to legal aid entitlement, which affect women’s issues in the main, I decided this was the...

Hospice Seeking Volunteers
Sign up for offers
Sign up for what's on guide
Popular Categories
By clicking 'ACCEPT', you agree to the storing of cookies on your device to enhance site navigation, analyse site usage, and assist in our marketing efforts.
For more information on how we use cookies, please see our Cookie Policy.