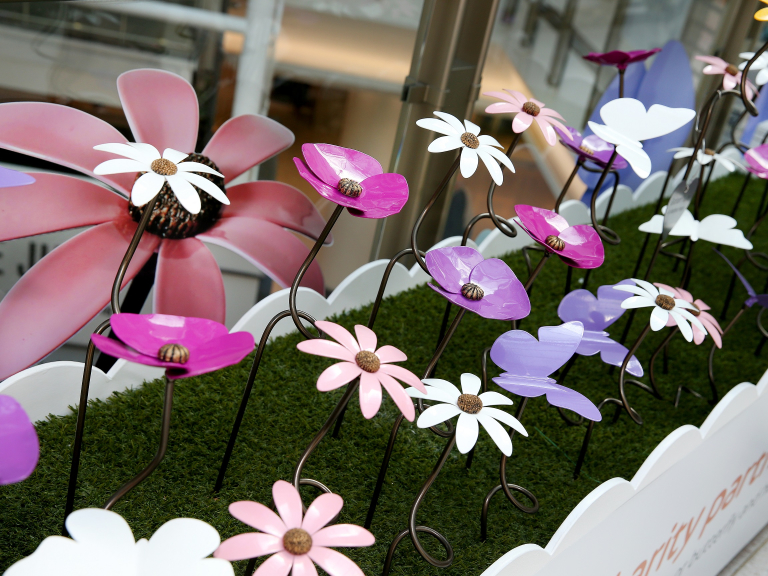 The event was attended by Rita Cowling, wife of the late Graham Taylor, the former footballer and England manager who cycled from London to Paris in 2010 to raise funds for the Royal British Legion’s Poppy Appeal.

For 2019, a special single yellow daisy has been sculpted in memory of Graham, and a collection of limited-edition daisies has been designed to join the existing butterfly and poppy creations from previous years.

Members of the public are invited to donate to the Hospice and dedicate a poppy, butterfly or daisy ornament in memory of a loved one. The display will remain in situ at intu Watford, outside John Lewis on the bridge, for the people of Watford to appreciate until mid September. After that, the display will be dismantled and the ornaments will be distributed to those who have purchased them.

Vicki Costello, general manager at intu Watford, said: “It was amazing to welcome Rita Cowling to the unveiling. I can confirm that the display is exceptionally beautiful – well worth a look. Peace Hospice is close to many people’s hearts, particularly in Watford, and we are very proud of our strong partnership with the charity. Through partnerships like these we are able to deliver positive impact on the community – something that is very important to us.”

The 75cm tall hand-sculpted garden ornaments are made from metal and vibrant coloured enamel. So far, £14,500 has been raised through the appeal for the Watford-based charity.

In previous years, the ornaments have been so popular that the charity has run out of stock, so order early so you don’t miss out! The suggested donation is £28 per ornament and the appeal will run until the autumn.

To dedicate poppies, butterflies or daisies, pick up a leaflet at the display, call on: 01923 330 340, or visit: https://www.peacehospicecare.org.uk/poppyappeal