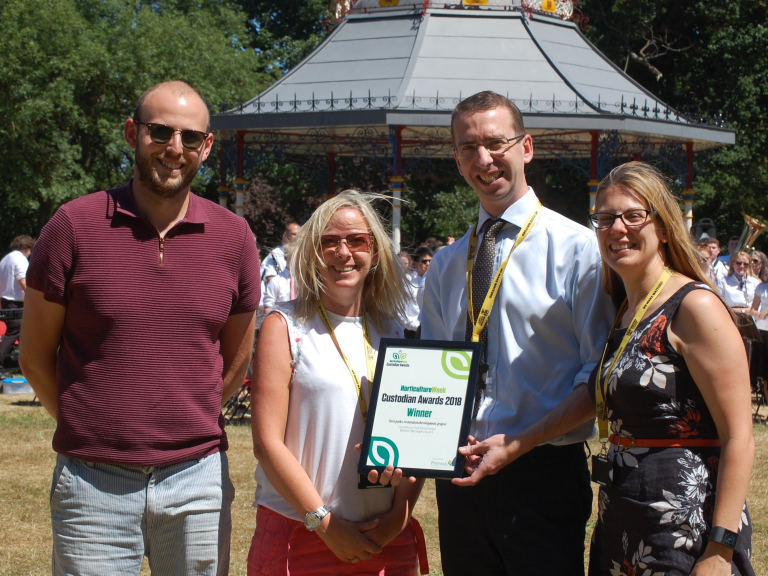 A national award has been handed to Watford Borough Council for its management of the £6.6m regeneration of historic beauty spot Cassiobury Park.

The project, which began in 2011, has received £6.6m of funding – £5m from the Heritage Lottery Fund and Big Lottery Fund, and £1.6m from the council. The scheme was named Best Parks Restoration/Development Project at the recent Horticulture Week Custodian Awards.

Elected Mayor of Watford Peter Taylor said: “We are delighted. Maintaining the quality of our amazing parks is one of my top priorities as Mayor. We have worked hard to make Cassiobury Park the landmark visitor attraction it is today. Under our management – with the help of our partners, Veolia, the Herts & Middlesex Wildlife Trust, and Friends of Cassiobury Park – it will remain so for generations to come.”

The project has included refurbishing the Cha Café and returning Watford’s Edwardian bandstand to its original home at the centre of the historic beauty spot.

The paddling pools received a £2.8m upgrade as a part of the regeneration works. The new state-of-the-art and energy efficient Cassiobury Park Hub was included in the redevelopment plan. It is now home to additional changing rooms, toilets, fully inclusive Changing Places facilities, events and education space, and the popular Daisy’s in the Park café.

New lighting, paths and information boards have been installed around the park, and the lost 18th century Lime Avenue of trees has been restored to its former glory. Cassiobury has been voted one of the UK’s top 10 parks, and is now visited more than 2.15m times per year.

Watford Borough Council bought most of Cassiobury Park – previously part of the estate of the Earls of Essex – between 1908 and 1913, so the wider public could enjoy it. The Earls – once incredibly wealthy – were eventually forced to demolish their lavish Cassiobury House home in 1927