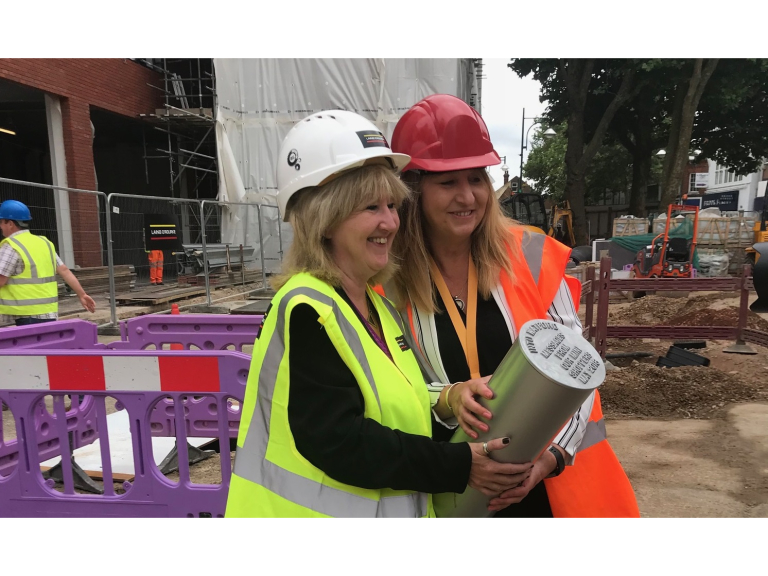 The poignant event marked a further stage closer to the completion of the highly anticipated £180m development of intu Watford, which is scheduled to start opening this autumn. With the support of the Deputy Mayor of Watford, Cllr Karen Collett, the capsule was lowered into a hole and covered.

“It’s extremely exciting to think that in hundreds of years to come, our time capsule will be unearthed and will give the people of Watford a glimpse into the past,” said Vicki Costello general manager of intu Watford.

Enclosed in the time capsule are drawings and messages from children that visited intu Watford over the Mother’s Day weekend and drew and wrote what they thought the centre would look like in 100 years.

Also included is a memory stick with a video of what the shopping centre currently looks like and footage from last year’s Christmas lights switch on. A copy of the Watford Observer was added, together with historic photos of Watford High Street, intu merchandise and a store guide.

Vicki added: “We are incredibly thankful to the Deputy Mayor of Watford for attending our event and for all those that contributed to the time capsule. We are now counting down to the launch of the new development that will transform shopping in Watford.”

Work began on the intu Watford extension development in late 2015 and, once complete, the new extension will house 10 new retailers, nine restaurants, a nine-screen IMAX cinema, Hollywood Bowl and a four-storey Debenhams. The redevelopment is due to open from autumn, over three phases starting with Debenhams, followed by other retailers and restaurants, then Cineworld and Hollywood Bowl.