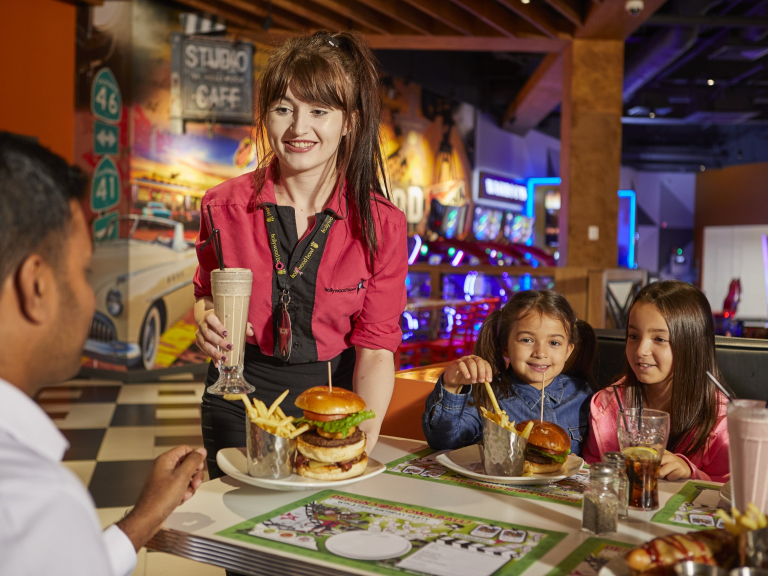 The bright lights of Hollywood are on their way to Watford town centre, with a brand-new Hollywood Bowl opening at the expanded intu centre next month. Part of the Watford retail and leisure destination’s £180 million extension, the 23,600 sq ft Hollywood Bowl will open its doors in mid-December, creating 40 new jobs in the process.

An impressive £2.4m project has seen the development of the new-generation 14-lane Hollywood Bowl entertainment centre in intu’s new Atrium area (formerly Charter Place) – making it the go-to destination for family, friends and work colleagues alike, whatever the occasion. The centre will sit alongside other big-name brands joining the intu Watford extension, including IMAX Cineworld, TGI Fridays and Yo! Sushi.

The new centre’s 14 lanes will be set against a striking backdrop, complete with plush furniture and contemporary American décor. It will also be home to a Hollywood Diner serving gourmet burgers, hot dogs, freshly made thick shakes served in retro milk bottles, and signature desserts.

Joining the Diner will be an American-style bar offering speciality cocktails, and two American pool tables for those wanting to sit back and relax before or after a game.

Visitors will also be able to play in Hollywood Bowl’s famous amusements area, which will feature leading games such as Mario Kart, Crossy Roads, Cruis’n Blast and retro games like Space Invaders and Pacman Hoops. There will also be the opportunity to ‘Play for Prizes’, where visitors can win tickets on their favourite games and exchange them for fun goodies.

Abigail Harris, Centre Manager for Hollywood Bowl intu Watford, said: “As the UK’s largest bowling company, we’re really excited to be opening a new centre at intu Watford, and we can’t wait to bring our bowling and all-round leisure experience to the town centre from December.

“Whether it’s for family fun, kids’ or adults’ birthday parties, work functions, nights with dates or mates or simply an excuse to celebrate the weekend – you name it, our team has got it covered!”

Vicki Costello, general manager at intu Watford, said: “We’re incredibly excited to bring Hollywood Bowl to the new development at intu Watford. This highly-anticipated addition will give families, friends and businesses a fantastic leisure offering to complete a great day or night out in Watford.”

The centre at intu Watford will be the second Hollywood Bowl to open its doors in Watford, joining the existing centre at Woodside Leisure Park in Garston. The new centre is currently recruiting for a number of exciting new roles. Visit www.careers.hollywoodbowl.co.uk for more information.