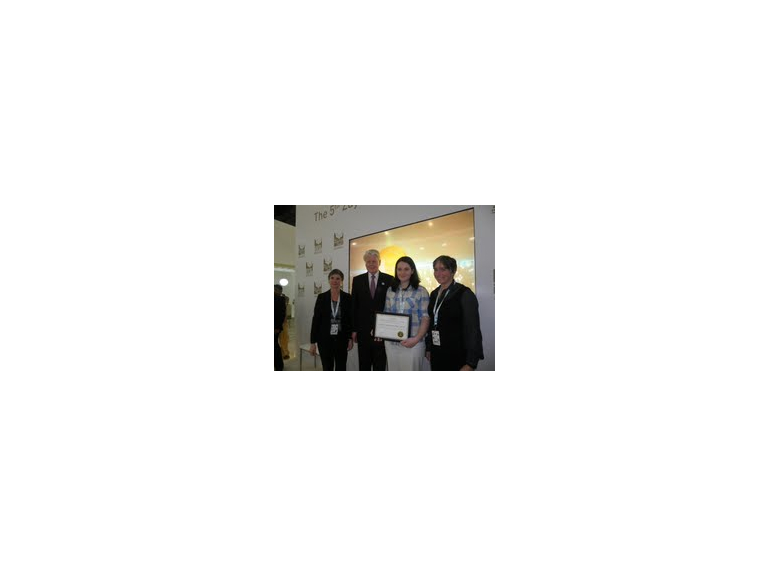 Three representatives from the School have just returned from an all-expenses paid trip to the UAE where they attended the opening ceremony of the World Future Energy Summit. Key speakers included the Queen of Jordan, Presidents of Iceland, France and Argentina as well as the royal families from Dubai and Abu Dhabi. President Hollande opened the ceremony while Queen Rania inspired the 3,200 strong audience about the importance of educating women and children in order to create a sustainable planet. The President of Iceland assisted HH General Sheikh Mohammed bin Zayed Al Nahyan, Crown Prince of Abu Dhabi, in presenting the awards for the Zayed Future Energy Prize. Siemens won the award for the top large corporation. There were also winners for small businesses and NGOs. This was the first year of the Global High Schools category so all finalists were treated royally, including a Gala Dinner after the award Ceremony at the Emirates Palace Hotel. Okehampton College won the prize for Europe with an impressive bid to install two wind turbines. Moira Pain, Head Girl from QEII High School, said, "All the finalists were so inspiring and, for us, the chance to share ideas and learn from each other was reward enough." Over the three days, the team gave a presentation at a local school and visited sites such as the Masdar Institute, an innovative university specialising in sustainable technologies. Most people had not heard of the Isle of Man and were very interested to learn about its unique position and the environmental work of the School. Head, Sue Moore said, "The school has really put the Island on the global stage. The other schools were impressed with our projects and we enjoyed meeting like-minded people from Tanzania, Mexico, the Bronx, Swaziland, India, Japan, UAE as well as our friends from Okehampton." Lesley Sleight, Head of Life Skills, was delighted that the hard work of the students has received international recognition once again. She said, "It was an honour to be recognised alongside leading scientists, multinational companies and world leaders. It was great that students' input into sustainable futures was valued and their voice was heard." The high status of the summit emphasises the critical importance of developing new technologies to address world issues such as population, the growing demand for water, global warming and other environmental issues. The world leaders stressed that action needs to be taken now to ensure a safe and peaceful world for our children. The team from QEII High School returned with the message that the Isle of Man must start now to invest in sustainable technologies which are already being extensively used by forward thinking nations. They hope to be able to continue with their dream to be the first School on the island to be heated entirely from sustainable energy sources. The wind turbine is the final part of this project and students are determined to make it a reality. Reaching this stage in such a prestigious competition has only increased their passion.