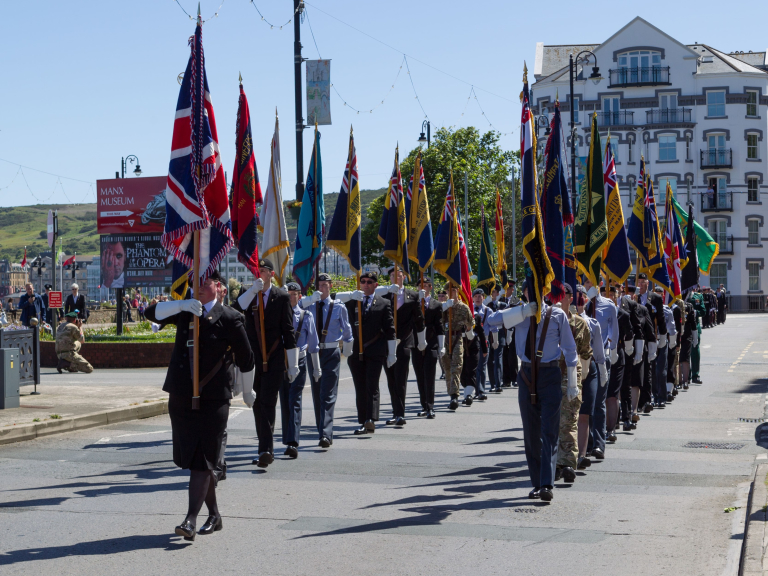 The public is invited to take part in the Isle of Man’s Armed Forces Day on Sunday 26th June.

Local men and women serving in the armed forces will join veterans in a parade along Douglas’s promenades at 3pm and at a church service at the Villa Marina at 3.45pm.

In what is always a moving highlight of the service, serving personnel returning to the Island for the occasion are welcomed into the Royal Hall with a standing ovation.

The day culminates in afternoon tea and an evening of entertainment at the Villa Marina.

The event has significance this year as the Island marks the 100th anniversary of the Battles of the Somme and Jutland in World War One and the 75th anniversary of America, Japan and Russia’s entry into World War Two and the sinking of the Bismark during the Battle of the Atlantic.

Veterans of World War Two are among those participating in the parade and service.

For the ninth time in the 10-year history of the event, students from the Department of Education and Children’s five secondary schools will take part.

Brigadier Norman Butler CBE chairs the Armed Forces’ Day organising committee, which has the patronage of the Lieutenant Governor, the President of Tynwald and the Chief Minister and is made up of representatives of all the Island’s ex-service organisations.

Brigadier Butler said: ‘The parade and service are always deeply moving occasions. To see veterans of past conflicts, some now a great age, walking alongside serving personnel is particularly poignant.

‘The Villa Marina is always packed with people, many just giving thanks for the work of the armed forces but many others remembering fallen comrades, relatives and friends.

‘The tea afterwards is a chance for everyone to mingle and share stories and is always greatly appreciated.

‘We hope anyone with a connection with the armed forces, past or present, will apply for tickets for the event, which are free of charge, and join us as we give thanks for all the armed forces have done, and continue to do, to protect our freedom.’

Juan Watterson MHK, the Isle of Man Government’s Armed Forces Champion, said: ‘The link between the Isle of Man and the armed forces has never been stronger. The Island now boasts 48 reservists and a thriving army, air and sea cadet movement. This is a good time to combine as a community to commemorate our past and present and remember those who have paid the ultimate price for the freedom of our Island.’

Application forms for tickets for Armed Forces Day can be obtained from the Villa Marina, the Isle of Man Government Welcome Centre at the Sea Terminal, the Manx Legion Club in Douglas, public libraries in Onchan and Ramsey and Commissioners’ offices or by returning the form that appears in this week’s Isle of Man Examiner and Isle of Man Courier.

All forms should be returned to Ann Wilson at 1 Kensington Avenue, Douglas, IM1 3ET.

Armed Forces Day is a British-Isles-wide event and a national event in the Isle of Man.

You can follow news of the event on the Facebook page Armed Forces Day Isle of Man.