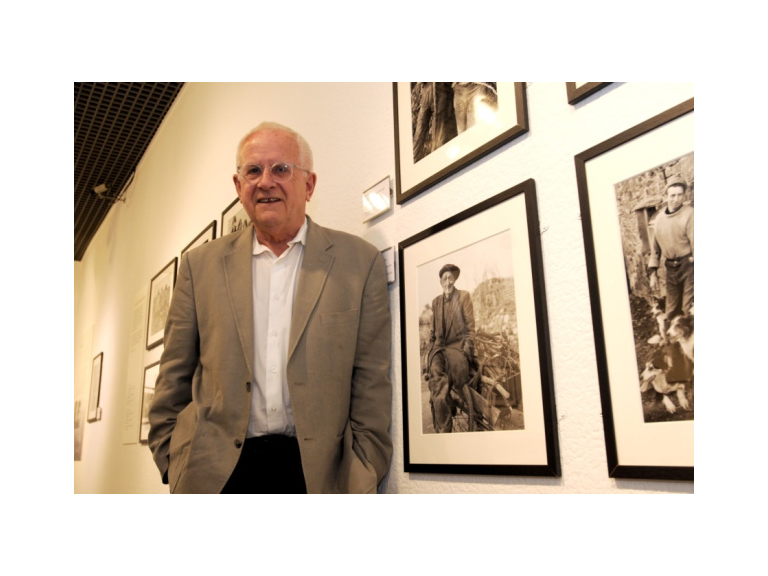 Stunning black and white images of the island’s people and landscapes by world-renowned Manx photographer and Harvard professor Chris Killip have gone on display at the Manx Museum.

While many of the images were taken in the early 1970s, some have never been exhibited before.

The launch of the Chris Killip exhibition, at the Manx Museum Gallery

The Isle of Man Revisited was opened on Friday, with many of the first visitors to see the exhibition being the subjects of the photos themselves.

They included Chris’s cousin Stanley Quirk, who was photographed on a tractor at Cooilslieau in 1969, and Alec Corlett, who was in a large group photograph taken on threshing day at Ballakilley, St John’s.

Another visitor was Fausto Giacomme, who has closely followed Chris’s work, and travelled over from Milan for the launch.

Chris was born at his father’s pub, the Highlander Inn, in 1946 and grew up living in Peel and then Douglas.

Flossie and Ashley Kinvig, whose picture Chris took in 1969, leafs through Isle of Man Revisited with the photographer(MW160506-136)

He became a beach photographer at Port Erin for Keigs in 1964 and later moved to London to take up a job as a photographic assistant.

A visit to a photography exhibition at the Museum of Modern Art in 1969 while he was in New York for a shoot with the model Twiggy was to prove a turning point for Chris.

‘I realised that I could do photography for its own sake,’ he told Island Life.

‘Later that day I thought “do what?”’

Chris Killip meets Ashley and Flossie Kinvig, whose picture he took in 1969, which is featured in the book

‘I thought maybe I should photograph the Isle of Man. That’s where I know and care about. I would have access to the Isle of Man that other people wouldn’t have.’

He returned to the island, where initially his focus was on the remaining waterwheels.

‘Things evolved from that,’ he said. ‘It became broader, and bigger and more ambitious.’

He took photographs between September and May 1969 to 1973, processing them in a cupboard in his father’s pub, the Bowling Green, and occasionally returning to London to have some of the printed.

Alec Corlett, next to his picture, taken in 1969

He was keen to capture the Manx people and landscapes as they were, before they inevitably changed.

On a return visit to the USA in 1971, Lee Witkin, the New York gallery owner, commissioned a limited edition portfolio of the Isle of Man work, paying for it in advance so that Chris could continue to photograph.

Thirty years after Isle of Man: A book about the Manx was published in 1980. Chris was preparing for an exhibition at the Museum Folkwang in Germany when he went back through the Isle of Man negatives for the first time.

He admits that he realises, with hindsight, that he made ‘plenty of mistakes’.

‘It surprises me now. I like them more than some pictures I did use.’

Isle of Man Revisited was published by Steidl in November.

Some of the images have been changed, 30 more have been added and all of them have been printed larger. ‘It was a very enjoyable process to look back at the work,’ he said.

The cover image of the exhibition is of Stevie Quirk, taken at Raby Farm in Glen Maye.

‘I saw him coming out of a field and he asked me for the time,’ Chris said.

‘I later realised that he had a watch strap hanging out of his pocket and he was just stopping me for a chat.’

At the time, he didn’t know Stevie’s name.

One image that wasn’t in the original Isle of Man collection is of his cousin Stanley’s house at Cranstal, Bride, which was being lost to coastal erosion.

The house has since been washed away and Chris has been unable to find where it was.

‘At the time I thought it was too melodramatic,’ he said. ‘Now, it’s a piece of history.’

Chris was living in Newcastle when he got a phone call out of the blue from Harvard asking him whether he had ever thought about teaching.

After spending a week at the university, he agreed to spend a year there initially.

He has now been there for 25 years and has the title of professor of visual and environmental studies.

Chris said: ‘Nothing in my photographic life has given me as much pleasure as having my pictures here.

‘The Isle of Man is where the pictures belong.’

The exhibition continues until July 30.

And visitors are invited to get involved by filling in a book that has been left with details about the people and places photographed.