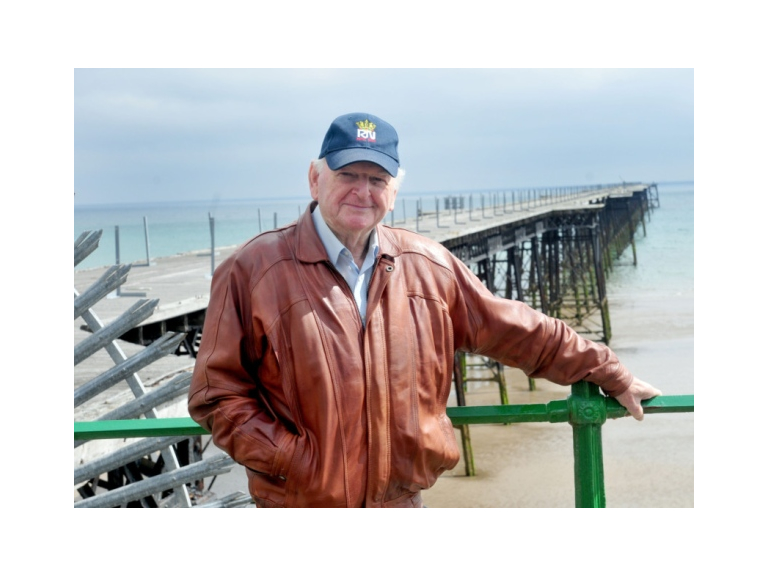 It is, he says, just a jigsaw puzzle – albeit a giant one, as long as Snaefell is high.

The retired RAF engineer behind an ambitious scheme to restore Ramsey Queen’s Pier says he is convinced it will be a success.

Tom Durrant says he has worked on major construction projects around the world during his long career.

Restoration has been the dream of Queen’s Pier campaigners for nearly a quarter of a century, the Victorian landmark having closed in 1991.

Now director of harbours Ann Reynolds has confirmed that a three-year lease is being drawn up to offer the pier at a peppercorn rent to a charitable trust led by Mr Durrant.

The Ramsey Queen’s Pier Restoration Trust plans to begin fund-raising with a view to restoring the first 50m section.

On its Facebook page, the Trust said: ‘We have made a lot of progress in planning the sequence of rebuild.

‘The pier needs metalwork replacing close to shore. Tooling cost and safety is understood. The pier has been neglected for many years but the trust is very positive that work can start, providing we get help from the public.’

Mr Durrant says the price tag is likely to be about £100,000 – rather less than the multi-million pounds previously quoted by government-commissioned specialists.

But then Tom says he and the small team he has put together is going to do much of the work themselves.

He said: ‘We need to replace the metalwork in the 25m sections between the promenade and the first set up uprights. We need to take the timbers up and set up the scaffolding. I’ve got a chap who has designed a gondola that will allow us to work under the girders.

‘Then we move on to the sections between bays two and three where the metalwork is good enough to be sandblasted.’

Tom said box girder works for that first section will cost £7,500 each and five of them are required. He said £10,000 would be needed for tooling and the total for the whole project would likely come to about £100,000.

To save further costs, larch from felled plantations – diseased bark having been removed – may be used to redeck the pier.

Once the lease is signed and the charity registered, Tom says the Trust will apply for Lottery funding. An appeal for funding will be launched not just to raise money for the restoration but for on-going maintenance.

‘The pier will not pay for itself,’ said Tom.

Mr Durrant is a former RAF radar engineer who was stationed at Jurby in the early 1950s and returned to the island to live in 1980.

He was involved in a renewable energy centre based at Silverdale and has even built his own electric car.

He said he became interested in the pier as a restoration project after moving to Andreas, having lived in Gleneedle for many years where he had a wind turbine in his garden.

It is understood that if the trust is successful in its endeavours after three years the pier could be offered for sale on a competitive tender basis.

The Trust says it will submit a tender to buy the pier to finish the remaining part of the pier. ‘We will ask the government to word the tender that the pier must be restored and not scrapped,’ said Tom.

He said a planning application would be submitted to demolish and replace the 1950s entrance building.

He ruled out bringing back to the original pier tram, now a museum piece, he said. But he is keen on running the pier railway again, perhaps using a flywheel train he is hoping to source from Bristol.

Other hopes long-term could be to have a tearoom and bandstand.

Infrastructure Minister Phil Gawne said: ‘It’s great that someone has taken the initiative.

‘The department is doing everything it can to support them.