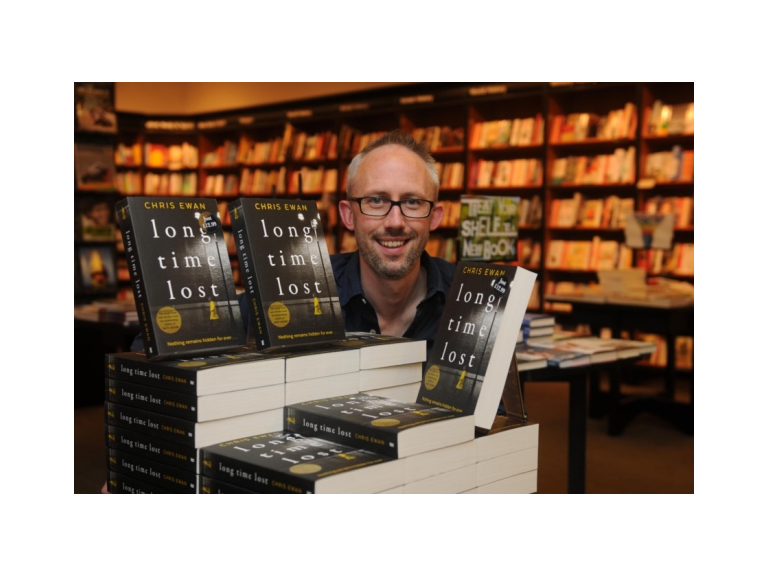 Chris, who moved away from the island with his Manx wife Jo and daughter to Somerset 18 months ago, said the launch of Long Time Lost at Waterstones, in Douglas, was fitting as the novel opens in Laxey.

It’s his third stand-alone thriller, following on from Safe House and Dark Tides.

He told the Examiner: ‘It’s a pleasure to be back. I am looking forward to seeing lots of friends and family. It’s always been great to have the island’s support behind the books.

‘Since this one opens in a lonely cliffside house in Laxey it seemed like the right place to come and launch the book.’

Long Time Lost was about a year in the making and the story was inspired by a rumour Chris had heard.

‘It goes back to Safe House which grew out of skeet I had heard about the Isle of Man being used to relocate people in witness protection schemes,’ he explained.

‘I have always enjoyed stories about people who go missing or disappear and who then reappear against all the odds.

Chris said Long Time Lost had proved particularly tricky to write: ‘It’s by far the most ambitious novel I’ve written – multiple plot lines and multiple locations. It’s probably been the most fulfilling book to write because of that.’

Sanctus trilogy author Simon Toyne has been quick to praise the novel, describing it as ‘a beautifully paced and constructed thriller with real characters to root for and to hate, written in a smooth and easy style that keeps you reading into the night’.

Chris is busy working on his next title.

He said: ‘I can’t say too much about the book I’m working on now. It’s set in Bristol and concerns the disappearance of a woman during the Bristol international balloon festival. I’m near to finishing it so hopefully it will be available next year.’

He said the island made an ideal setting for a crime novel with its own culture and customs, its stark landscape, and the sense of claustrophobia created for the characters.

And there is good news for his readers who enjoy the island settings.

‘There’s plenty more scope for crime novels set in the island,’ he said. ‘I’m confident I’ll be writing about the Isle of Man in the future.’