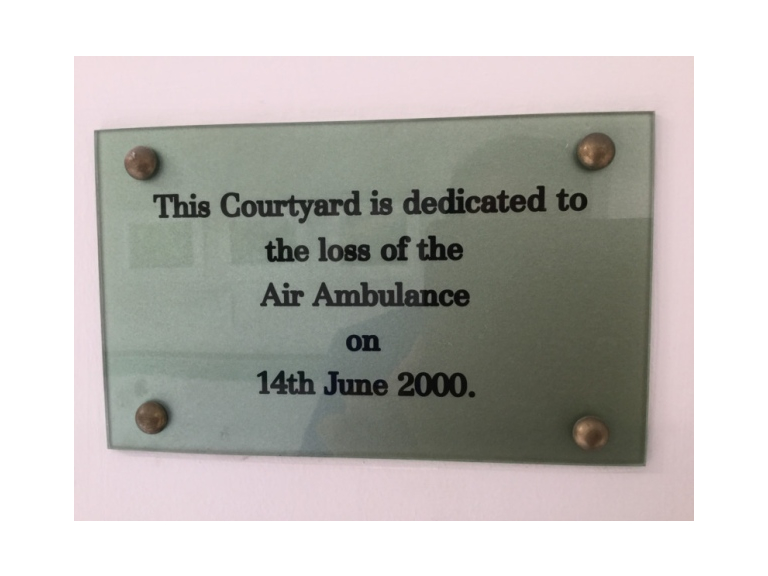 A plaque erected at Noble’s Hospital to commemorate an air ambulance crash 16 years ago had been branded insensitive.

But following calls from the family of a couple who died in the tragedy, the Health Minister has agreed to look at replacing the plaque with one that includes the names of those who died.

Scene of the 2000 air ambulance crash in the Mersey

There were no survivors when the twin-engine Piper light aircraft crashed into the River Mersey just seconds away from landing at Speke Airport in June 2000.

Stephen Charlton, 53, of Douglas, who was being transferred to Walton Hospital in Liverpool for tests, died in the crash along with his wife, Lynn, 50.

A plaque in a courtyard at Noble’s Hospital dedicated to the loss of the air ambulance does not list the names of the victims.

But following lobbying by David Cretney MLC on behalf of the Charlton’s children that looks set to change.

On his Facebook page, Jonathan Charlton said: ‘Sixteen years ago my family were left devastated by the air ambulance crash that killed both of my parents.

‘I also have to put up with what I can only call a disgraceful plaque at the hospital which reads ‘dedicated to the loss of the air ambulance’ which sounds like the government are sad they lost the plane.’

A spokesman for the Department of Health and Social Care said: ‘The devastating loss in June 2000 of the five people on board an air ambulance was deeply felt by their family, friends and colleagues as well as the community as a whole.

‘A courtyard at Noble’s Hospital was dedicated as a permanent memorial to the tragedy so that the loss would never be forgotten and in the hope of bringing some comfort to all those who loved, worked with and knew those on board. A plaque was erected with the very best of intentions and the department regrets any upset the wording has caused, which is the very last thing anyone would want.

‘The Minister for Health and Social Care, Howard Quayle MHK, has agreed to look at replacing the plaque with one including the names of those who lost their lives, where family members give their consent.’

An inquest into the tragedy returned verdicts of accidental death on all five victims and heard how Mr Whyham may have become disorientated. It emerged he was suffering from a heart condition which hadn’t been detected during a medical six weeks before the crash.

Mr Charlton is calling for an independent investigation into the crash, believing there are still questions to be answered. He said after the crash his family had been sent a bill for £8,000 for the cost of bringing the bodies of his parents home.

‘The families have waited for such a simple thing for too long. I am very thankful that after I made representations to the DHSC, Minister Howard Quayle has confirmed to me that this will be put right with a new plaque recognising the victims. I hope this brings some comfort to Jonathan and his family and the other families involved in this sad matter.’