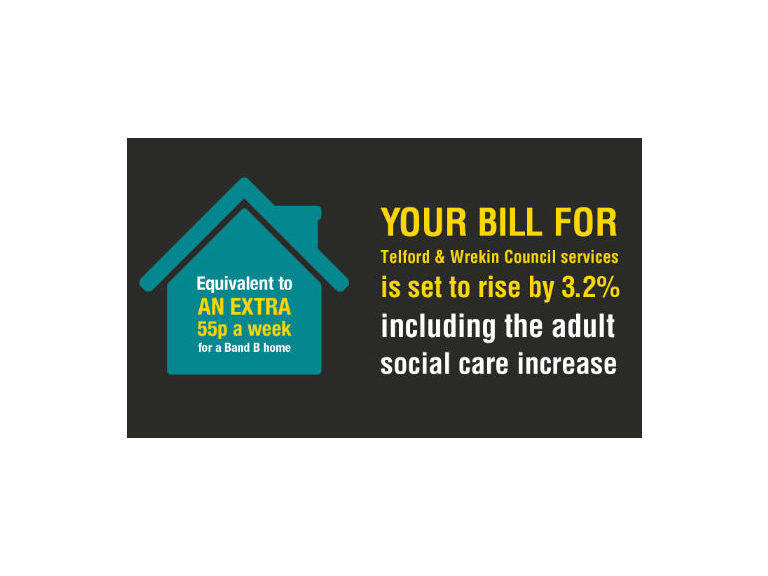 Telford & Wrekin Council is to propose raise council tax in 2017 by 3.2 per cent.

This includes a 2 per cent increase to support adult social care that the Government has already assumed that councils like Telford & Wrekin Council will make.
The Council is proposing to increase council tax by a further 1.2 per cent, giving a total increase of 3.2 per cent.  The decision to do this reflects the findings of the Council’s budget consultation.
Three-quarters of this additional 1.2 per cent increase will be used to support adult social care service and services for vulnerable children. The 1.2 per cent is the same as the now-scrapped government freeze grant.
Overall, the 3.2 per cent increase would add 55p a week for the borough average Band B property for the Telford & Wrekin Council element of next year’s council tax bill. On top of this, there are separate precepts for both police and fire authorities and town or parish councils.
More than 60 per cent of respondents to the Council’s budget consultation preferred to increase Council Tax by at least 1.2 per cent above the Government’s 2 per cent assumed increase for adult social care.
Subject to there being no changes in the Government’s funding policy, the Council proposes to apply this increase annually for the next four years.
Telford & Wrekin Council leader Councillor Kuldip Sahota said:  “The feedback from the consultation was clearly in favour of an increase in council tax over and above the 2 per cent that the Government has already assumed we will make.
“Recognising that many of our residents face financial pressures, we recommend restricting this rise, unlike many other councils who have opted to raise council tax by almost 4 per cent. This is the maximum rise a council can propose without needing a local referendum.”
Councillor Lee Carter, cabinet member for Finance and Service Delivery, said:
“Most of this increase will go to the key areas of adult social care and services for vulnerable children but the Council will also be able to make some changes to its savings proposals and will announce details of these once the results of the consultation have been fully analysed.
“This reflects the feedback from the public where almost nine in ten people agreed that we should protect essential services for children and adults as far as possible.”
The proposed rise in council tax will be considered by the Council’s cabinet on 25 February and Full Council on 3 March, when the Council budget for 2016/17 must be set.
Despite the council tax increase, the council still faces an extremely challenging financial outlook and will have to continue to make cuts to many services as a result of the significant cuts to our grant from Government.
Telford & Wrekin Council did not receive any of the extra £300m that the Government made available in the final grant settlement.
More