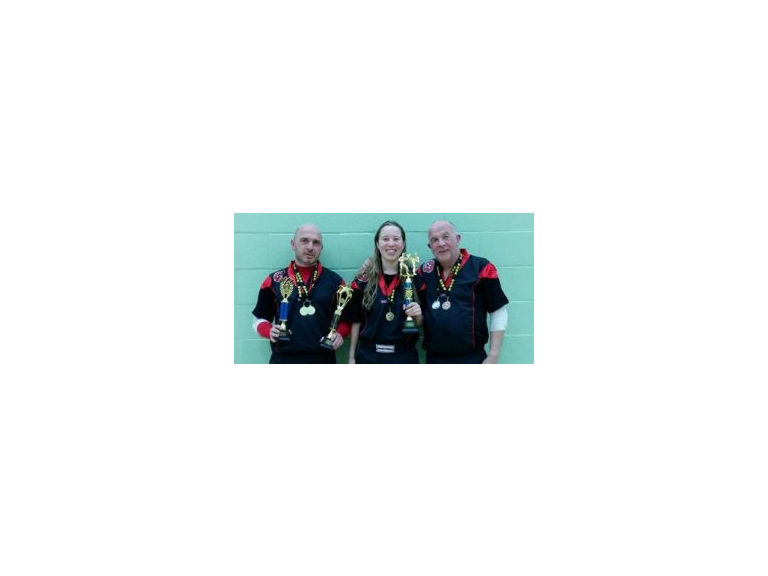 As the year draws to a close, members of the Shrewsbury based Team AKA continued to build upon the successes the club has enjoyed in 2016.

First up was Joanne Savage in the advanced ladies +70kg section. Fighting impressively from the outset Joanne first won her advanced section in fine fashion and then went through to the Grand Champions section.

In a comfortable fight, Joanne was able to showcase the full range of her talents and was crowned WUMA British Open Ladies Champion at the +70kg weight.

Pete Savage and Vince Dovey were both competing in the +85kg and Veterans categories and in both sections, they booked their places in the finals. After two extremely close and hard fought bouts, Vince secured two gold medals and Pete two silver medals, but both fights were nip and tuck and could have gone either way.

Vince then went on to compete in the Grand Champions sections. Fighting first against a much more experienced competitor, Vince was unable to build on his previous performances and had to settle for a silver medal.

Next up was the Grand Champions Veterans final and once again Vince was up against a fighter who had experience at World and European Championships. Although not able to beat his opponent, the fight was close and it was a creditable performance for Vince to secure another silver medal.

Club owner and team trainer Chris Aston said “Once again I am incredibly proud of my students. Hard work and their dedication in training have paid off for Joanne, Pete and Vince and they have competed in a prestigious competition and brought home an impressive haul of medals for the club”.

“Pete and Vince are both great competitors and are building a great reputation on the circuit for both their performances and their attitude at competitions. It is therefore very pleasing to see that their hard work continues to pay off in terms of medals and trophies”.

“However I feel that a special mention should be made for Joanne’s performances of late. Joanne has struggled with a long-standing injury and has been working with incredible dedication to get back to the levels she knows she can achieve”