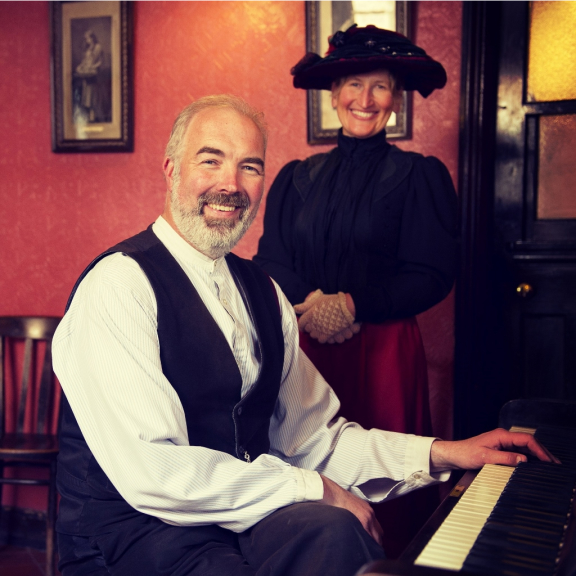 Step back in time and go along to the first in a series of nostalgic music hall evenings, being held as part of the Ironbridge Gorge Museums’ 50th Anniversary celebrations, at Blists Hill Victorian Town on Friday, 24th March.

Taking place in the Forest Glen Pavilion between 6.30pm and 10pm, the lively, themed evening includes a two-course meal of Shropshire fidget pie, vegetarian option is Leek & Red Onion Cobbler, followed by damson bread and butter pudding and tea & coffee.  Afterwards watch and join in the entertainment live from the piano.

The Museum’s resident performers will regale the crowd with a host of Victorian classic songs such as the ‘Man on the Flying Trapeze’, ‘When Father Papered the Parlour’, ‘Boiled Beef and Carrots’ and the ever-popular ‘Do Like to Be Beside the Seaside’ and ‘Dilly-Dally on the Way’.

Everyone is invited to dress in Victorian costume for the evening, so ladies should dust off their bustles and crinolines and gents spruce up your top hats and tails, this is going to be an evening to remember!

Since its construction by the Pointon family in 1889, the Forest Glen Refreshment Pavilion has occupied a very special position in the local community, formerly at the base of Shropshire’s famous Wrekin hill and since moved, brick-by-brick to Blists Hill Victorian Town.

Tickets at £25 per adult must be pre-booked by calling Nikki Birch on 01785 252247 or email nikkib@jenkinsonscaterers.co.uk.  Annual Passport Tickets are not valid for this evening and dogs will not be permitted.