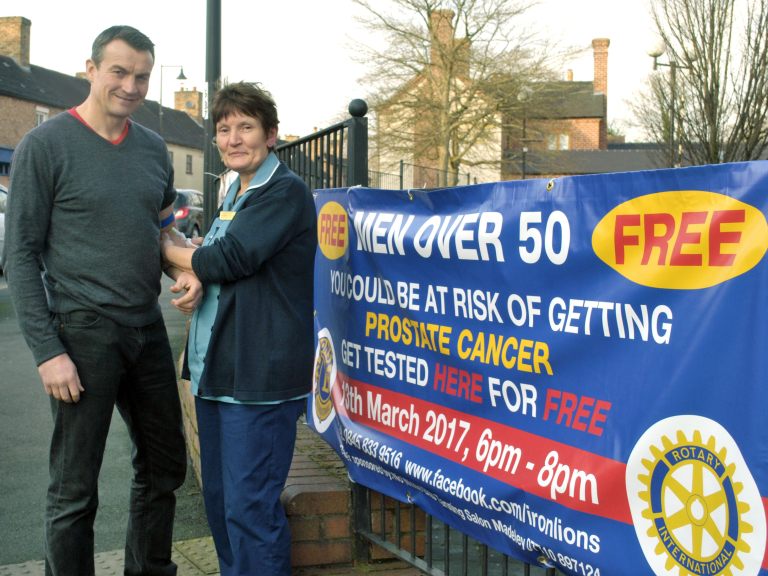 March is National Prostate Cancer Awareness Month and to support it Telford men are being urged to ‘March into Madeley’ and get tested for the ‘hidden killer’ disease at a free screening event.

The drop-in event is being jointly staged by Ironbridge Lions Club and Ironbridge Rotary Club, with the help of additional funding from the National Lottery and local businesses.

Open to all men over fifty-years of age, screening will take place from 6-8pm on Monday 13th March at Jubilee House, 74 High Street, Telford TF7 5AH. No appointment is necessary. The test is free, although people can make a donation to help to stage future such events if they wish.

Currently there is no national screening programme for prostate cancer which claims the lives of one man every hour in the UK. In Shropshire, 250 men are diagnosed with the disease every year.

Prostate cancer is known as the ‘hidden killer’ because symptoms are usually not obvious until the disease is in its later stages. Yet with early diagnosis victims can generally be successfully treated and go on to achieve a normal lifespan.

The Madeley screening event has received the backing of former world boxing champion, Richie Woodhall, whose father Len died after an eight-year battle with the disease.

Ironbridge Lions President, John Marsh, said: “As soon as Richie heard about our screening event he willingly threw his weight behind it to raise awareness of the disease and the importance of getting tested early.

“All that’s involved is a simple blood test designed to identify the level of the prostate specific antigen. The test will be administered by a medical team under the supervision of retired consultant urological surgeon David Baxter-Smith. It will then be sent away for analysis and the results will be sent out by letter, together with advice about any necessary follow-up action.

“We are urging all men over fifty-years of age to come along. They don’t need to make an appointment, just turn up. Statistics have shown that testing is particularly important for Afro Caribbean ethnic groups and those who have any family history of prostate cancer.”