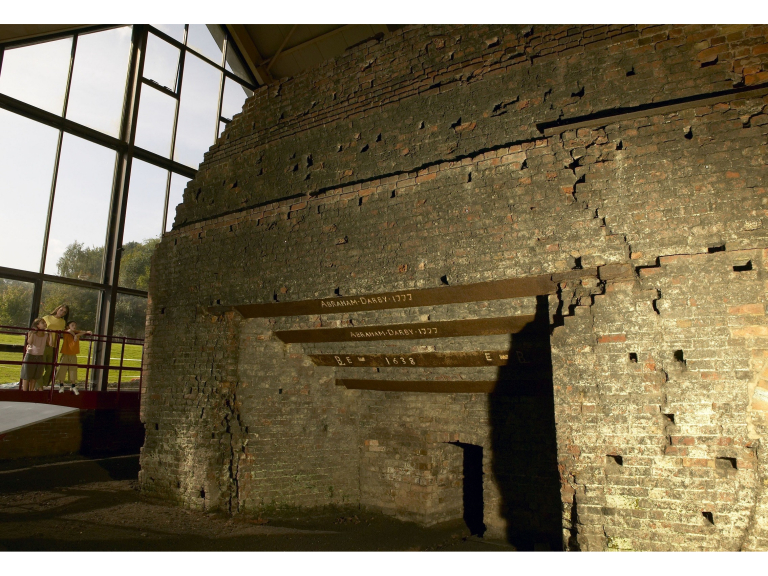 The Ironbridge Gorge Museum Trust is to receive a match funding scheme grant; every pound the Trust raises for this campaign over the next four years will be matched by HLF, to a maximum value of £1 million.

The announcement was made at Enginuity - Design, Science and Technology Centre in Coalbrookdale, during a lunch celebrating the 50th anniversary of the founding of the Ironbridge Gorge Museum Trust.

Ironbridge Gorge is widely recognised as the Birthplace of the Industrial Revolution, and securing this grant helps ensure the future of some of the key monuments within the Ironbridge Gorge World Heritage Site.

The endowment will create an annual income that will be used specifically to preserve and protect the Old Furnace along with other significant buildings and monuments in Coalbrookdale, allowing preventative maintenance and repairs and specialist conservation advice and work. The early industrial landscape of Coalbrookdale is internationally significant, as it is where Abraham Darby I first smelted iron using coke, the innovation that kick-started the Industrial Revolution and changed the world forever.

Darby’s Old Furnace, where this took place, is one of the key sites that will benefit from this funding, along with nearby buildings such as the Quaker Burial Ground, Arboretum, Darby Houses and Coalbrookdale Company’s Warehouses.  As well as making sure these sites are protected for future generations, the money from the endowment will create better access for the public and improve the interpretation of the sites, so that people gain a better understanding of their significance in world history.

The Heritage Lottery Fund launched Heritage Endowments with the aim of protecting the future of some of the UK’s most important heritage and enablingsuccessful applicants to increase their fundraising expertise. Through this programme, the HLF will help organisations build stronger relationships with donors and to encourage increased levels of donations into the heritage sector from private and institutional donors.

Anna Brennand, Chief Executive Officer Ironbridge Gorge Museum Trust explains; “We are delighted that the Trust has secured this significant grant from the Heritage Lottery Fund and we are very grateful to National Lottery players for making it possible.

“The Trust has an excellent track record in securing funding for major capital development programmes, but it is also important that we develop a £15 million ‘Fund for the Future’, which will help ensure that our internationally significant heritage assets are secure for future generations. This lead donation from HLF is a real boost in driving forward our appeal.

“Our team’s hard work starts now, as we have four years to raise an additional £1 million as match funding. Securing the first £1 million has created a real opportunity for us to further develop our fundraising skills across the organisation and it will greatly help cultivate our relationship with existing supporters and open doors to new ones.”

Anna concludes: “This grant from the Heritage Lottery Fund will be used exclusively for the conservation of Coalbrookdale’s industrial landscape. It could not have come at a better time, as this year we are celebrating the 50th anniversary of the Trust and this grant will help ensure the Museum continues to thrive for the next 50 years and beyond.”

In April 2017, the Trust launched its new Coalbrookdale Masterplan, along with its associated fundraising campaign, which will see the conservation and development of the museums and monuments there. The first phase will be the creation of a new destination café, with work starting in autumn 2017. Future phases, once funding has been secured, will be the refurbishment of Enginuity, the National Design and Technology Centre along with the creation of a new Collections Store, as well as further works to the Old Furnace and associated buildings.

Whilst many people know the Ironbridge Gorge Museum Trust as a place for a wonderful day out, few realise that it is an independent education and heritage conservation charity and that all of the profits made from admission fees and visitor expenditure in cafés and shops is reinvested into the conservation of the Trust’s diverse heritage assets.