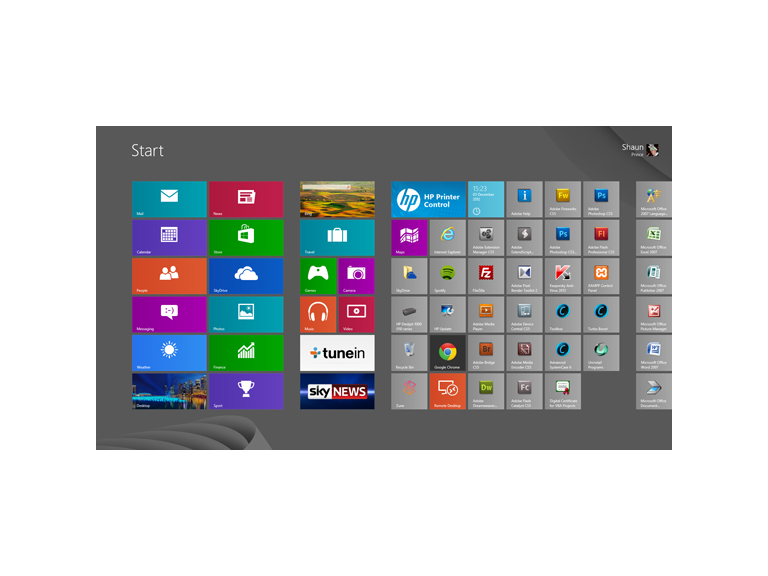 Windows 8 offers a fantastic new experience, with an interface that is designed to suit all levels and styles of learning. It is very responsive, with some great integrated features and good dual functionality navigation.

With desktops and laptops, the  Fast Boot and Secure Boot features - as well as the dual interface functionality  - will probably be the main factor driving your decision to upgrade to Windows  8. And when it comes to your natural hardware refresh, Windows 8 is definitely  the way to go. However, bear in mind that some key functionality is not  available through a simple upgrade of the operating system on existing  hardware.

The big noise around the Windows 8 launch involves touch-enabled devices like Microsoft's own super-slick Surface. But Windows 8 is great news for regular desktop and laptop users. Here's 10 reasons why...

Well, by Microsoft's standards, at least. If you've got almost any kind of legit Windows installation, from XP onwards, it's yours for £99.99.

2. It's less confusing for PC users.

It boots quicker from cold and in most cases resumes are almost instantaneous.

It's all a result of the fact that Windows 8 is optimised for ultra mobile devices. That also explains why Windows is simply...

Designed to run on tablets and ultra books, Windows 8 is lean and mean, and that means it'll fly on a traditional desktop or laptop machine.

Ok, you do lose some of the more resource-hungry features from Windows 7, including the Aero Glass interface, but you gain a whole lot more, which brings us to...

When it comes to the traditional desktop part of the Windows 8 interface, Microsoft has realised that less is more. Gone are the complex transparencies and drop shadows. In comes a cleaner, simpler interface that's kinder on the eye and will likely age very gracefully. Of course, there's also the new Modern UI which effectively means you get...

7. Two operating systems for the price of one

OK, more like a second user interface rather than full additional operating system. And much of the time, the Modern UI is just plain infuriating on a non-touch device.

But it is a completely different experience and when it works – and that does happen occasionally with keyboard and mouse – it's thoroughly refreshing. Of course, Modern UI also comes with a set of funky, built-in apps...

Your mileage will vary, but there's a good chance you'll like using at least some of the pre-baked Modern UI apps with your keyboard and mouse / track pad. The Mail, Calendar and People apps, for instance, look great and are slick and simple to use.

Speaking of slick and simple, you could say the same of Internet Explorer 10 in Windows 8.

OK, you're probably going install the browser du jour, be that Chrome or Firefox, on your home PC. But if you have to use IE, perhaps on a corporate box, it's far from the bane it used to be.

Any who, Windows 8 at least has addressed that with standard anti-virus in the form of Windows Defender. The Push Button Reset also allows you to return your PC to factory fresh condition in minutes without losing settings and data.

Storage Spaces, meanwhile, is essentially a more user friendly data mirroring option to replace clunky old RAID arrays. And File History back ups give you access to old versions of files. Not a bad list of extras, we're sure you'll agree.

In conclusion, don't be scared! Windows 8 is the best thing to happen to home computing since the invention of Wi-Fi!

For more information about Windows 8, or to arrange an upgrade or advice, please contact Shaun Prince on 07563 441261, www.shaunprince.com!

Buying or letting a house in St Neots

ALL FEMALE ST NEOTS ESTATE AGENCY LAUNCHES LOCAL DOMESTIC ABUSE CHARITY
Sign up for offers
Sign up for what's on guide
Become an author
Popular Categories
By clicking 'ACCEPT', you agree to the storing of cookies on your device to enhance site navigation, analyse site usage, and assist in our marketing efforts.
For more information on how we use cookies, please see our Cookie Policy.