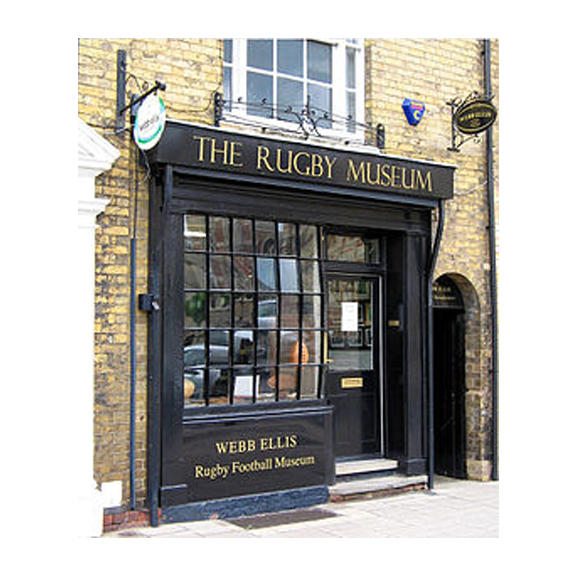 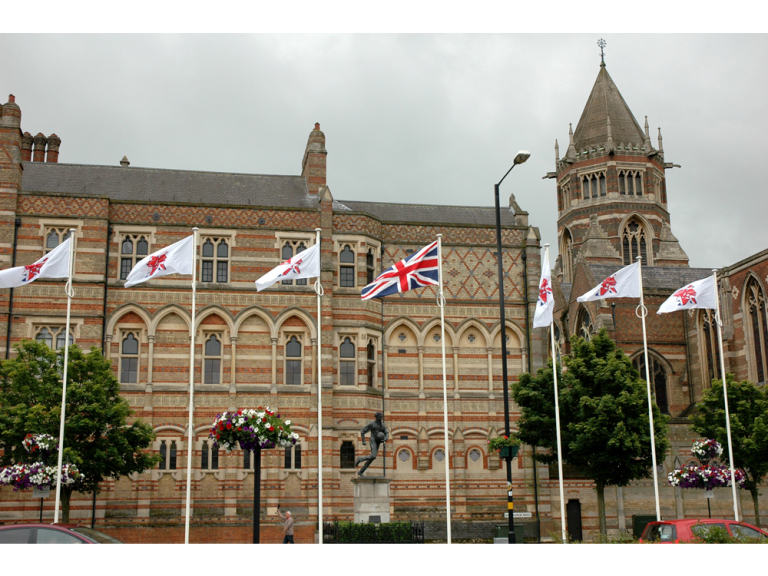 Standing in St Matthews Street, facing Rugby School, is the 19th century 'straight out of Dickens' building which houses the Webb Ellis Museum. The building has the longest continuous connection with the game of rugby football in the world, as it is here that boot and shoemaker James Gilbert made the first rugby footballs in 1842.

After Rugby School pupil William Webb Ellis famously picked up the ball during a football match and ran through the defence with it, so inventing the game of 'rugby football', it became apparent, as the game's popularity increased, that a new kind of ball may work better.  William Gilbert's shop was next to the school, and he started to supply them with balls made out of stitched leather casing and an inflated pig’s bladder! When inflated, the bladders became oval shaped, and the leather casing was made to fit. Inflating the balls was by lung power alone, and not a particularly pleasant job!  William's nephew James Gilbert took over making the balls after he died, and his ability to blow up the tightest match balls made the company famous.

Even now, Gilbert rugby balls are exported to all of the world's major rugby playing countries and tournaments.

Over the years, the shape has changed slightly to become more streamlined, and the modern rugby ball is made of hi-tech materials designed to keep its shape, give better grip and withstand the elements.

The Webb Ellis Museum focuses on the development of this vital piece of equipment over the years.  The museum houses a rich collection of international rugby memorabilia and tells the story of the game and Rugby School’s part in the birth of rugby, and features the letter that credited William Webb Ellis with inventing the sport, more than 50 years after the supposed event.  Its prestige and historic significance attracts fans of rugby from all over the world to view unique memorabilia not just from the early days of the sport but 20th and 21st century mementoes given by both National and International rugby teams and clubs.

Webb Ellis is not a large museum but it's collection has been built up over the last hundred years. It is privately owned by Lawrence Webb of Webb Ellis Ltd and is currently on loan to Rugby Borough Council. The Council works in partnership with the collection’s owner so that staff from the Council’s Arts, Heritage and Tourism department can provide the necessary expertise to ensure that such a collection of global historic importance can continue to benefit the community and Rugby’s £153 million visitor economy.

In 2009 the museum was given a sympathetic redevelopment which has improved the displays and interpretation of the collection for visitors, whilst losing none of the distinctive historic atmosphere of the famous shop and workshop.

The Webb Ellis is a significant jewel in Rugby's crown, drawing many visitors to the town.  Like so many things, we often neglect attractions that are right on our doorstep, so don't just leave the museum to the tourist industry; take a look yourself and you'll enjoy a fascinating home grown experience!