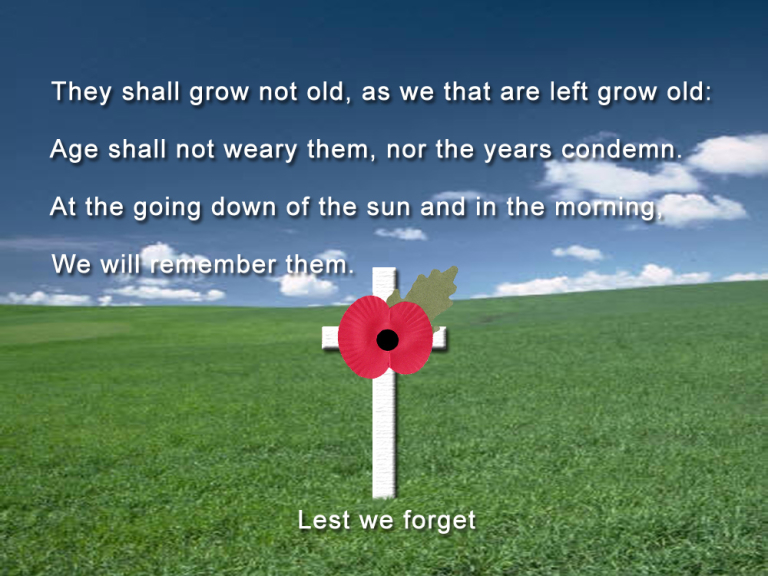 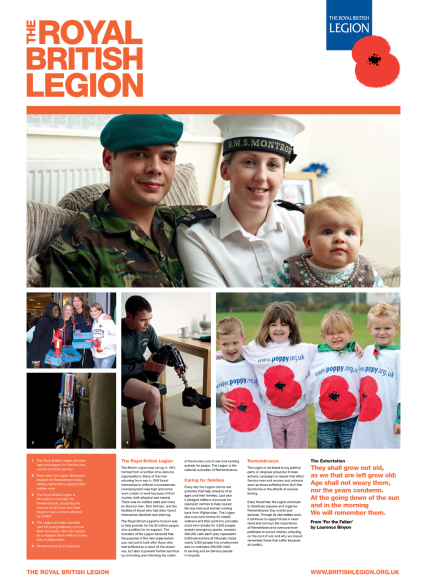 The Royal British Legion's Poppy Appeal 2012 was launched on Wednesday 24th October at a free pop-up poppy pop concert in Trafalgar Square, London and dedicated to the families of our Armed Forces.

Poppies are now on sale throughout the country as well as wreaths and lots of other items available on-line from The Royal British Legion.

The Royal British Legion perform a vital service, providing welfare to everyone associated with the Armed Forces.

In Rugby Town Centre, Rugby No1 Branch of The Royal British Legion will be selling poppies, wreaths, wristbands, metal pin badges, lapel badges, crosses and more... in the Clock Towers shopping centre from Monday 29th October 2012 until Saturday 10th November 2012 between 9:00 am and 4:00 pm and at Asda's supermarket foyer from Monday 5th November until Saturday 10th November 2012 between 3:00 pm and 8:00 pm.

Poppies are being sold throughout the town by various members of The Royal British Legion, Rugby branches as well as by other local retailers.

Everyone knows the date, which has now become Remembrance day - beyond the First World War, which it was originally to commemorate, it is now a day to remember the sacrifices made by the armed forces in conflicts the world over.

And this is the time of year that you will see people selling the symbolic poppies in aid of the The Royal British Legion in Rugby, Warwickshire and across the UK.

Yet how many of us buy them automatically, rather than understanding the meaning behind this simple paper flower?

As well as all this, they are the custodians of Remembrance and the Poppy appeal is their crucial fundraising activity. One of the UK’s largest membership organisations, they run the manufacture and sales of Poppies nationally.

The Poppy appeal was launched in 1921 inspired by the poem In Flanders Fields, by John McCrae – which contains the line ‘We shall not sleep, though poppies grow In Flanders' Fields’. They were initially real poppies sold by civilians to raise money and remember the fallen of the ‘Great War’ until the founder of The Disabled Society – which has cared for people injured in active service since 1922 – came up with the idea of replicas being manufactured by former servicemen who had been disabled in the war.

The practice continues to this day with the poppies themselves designed to be easily assembled by people with disabilities, so next time you see someone selling the paper flower in Rugby, remember the story behind the poppy.