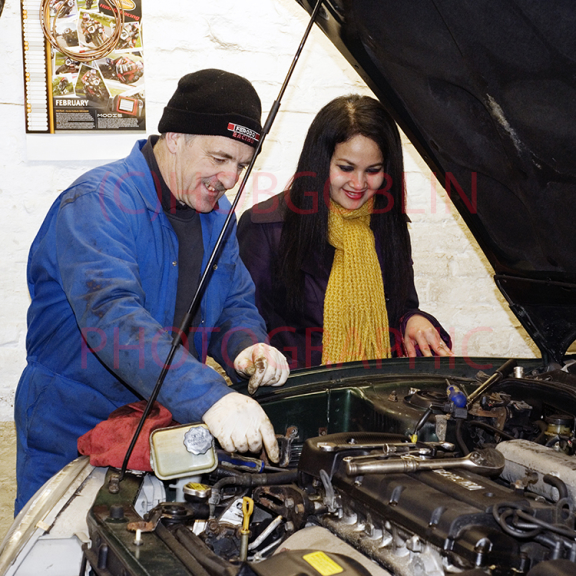 The spare part for my car duly arrived after buying from a specialist dealer on the internet - it's a small box containing a set of electrical pins with a plastic plunger on it.This fits behind the brake pedal in the depths of the footwell and switches the brake lights on when the pedal is pressed. If you know exactly where it goes, it would take a maximum of ten minutes to slot into place - unfortunately, I don't know exactly where it goes.

Monday morning and called the small garage where the owner specializes in my make of car only to be told that he has injured his back and so can't be crawling around in the footwell to fit it until possibly next week, which is fair enough. I only know of one other small garage and the owner is nearing retirement so doesn't want or need much work and certainly doesn't want to work on my car as it fills his garage, so I don't tend to call him anymore!

I decided to call a few garages at random from the list on the internet.The first garage informed me that they could have a look but not until after 2pm as most of their mechanics were on lunch break which would be understandable if it were not 11am...that's an impressive lunch break!The second garage I called confirmed that it was a simple ten minute job and they could do it that day....for £30. Now I realise and appreciate that mechanics are not cheap but £30 for ten minutes work....nice work if you can get it I guess.Not surprisingly, I declined his generous offer. I appreciate that there are many overheads to pay and equipment costs to cover and as a photographer, I know how expensive equipment can be but even so, I don't think I could look at one of my clients in the eye and quote £30 for ten minutes work.

It did get me thinking though....are there still small, family run garages that will do a small job for a fair price and take the trouble to actually ask your name out of courtesy rather than to know what to write on the bill? This always used to be the case and numerous small garages could be found but then, of course, progress happened.

It seemed to start in the early 1980's when a large foreign car maker started bringing out their new cars which required special tooling designed to fit only that particular marque. It was the starting point in the direction that car makers were destined to go. My late father always used to work on his own cars and had enough tools to cover every eventuality but as time went on and cars became ever more complex requiring ever more sophisticated tooling, he joined the ranks and took it to the garage just like most of us have to do now. Bearing in mind that most cars are now also computer controlled requiring specialist programmes to diagnose the faults that it is not too surprising that the small independent garages have been pushed out of the running due to the huge investments needed. It also explains why so many garages specialize in one or two car makes only as the tooling needed is specialised and expensive.

Having said all of that, I still think that those small garages must still be out there....it's just finding them! If you know of one of these rare gems, please let us know!!

In the meantime, it's the bus for me until next week....