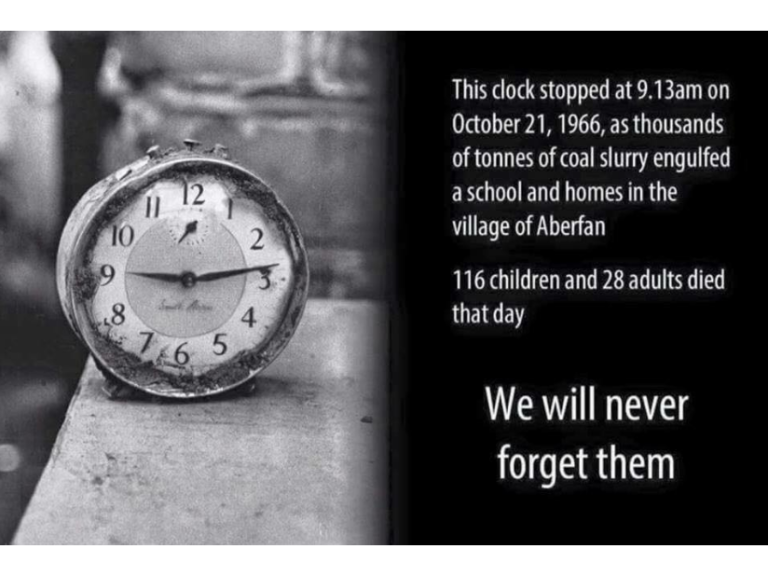 At 9.15 am on Friday, October 21, 1966 a waste tip slid down a mountainside into the mining village of Aberfan, near Merthyr Tydfil in South Wales. It first destroyed a farm cottage in its path, killing all the occupants. At Pantglas Junior School, just below, the children had just returned to their classes after singing All Things Bright and Beautiful at their assembly. It was sunny on the mountain but foggy in the village, with visibility about 50 yards. The tipping gang up the mountain had seen the slide start, but could not raise the alarm because their telephone cable had been repeatedly stolen. (The Tribunal of Inquiry later established that the disaster happened so quickly that a telephone warning would not have saved lives.) Down in the village, nobody saw anything, but everybody heard the noise. Gaynor Minett, an eight-year-old at the school, remembered four years later:

It was a tremendous rumbling sound and all the school went dead. You could hear a pin drop. Everyone just froze in their seats. I just managed to get up and I reached the end of my desk when the sound got louder and nearer, until I could see the black out of the window. I can't remember any more but I woke up to find that a horrible nightmare had just begun in front of my eyes.

The slide engulfed the school and about 20 houses in the village before coming to rest. Then there was total silence. George Williams, who was trapped in the wreckage, remembered that 'In that silence you couldn't hear a bird or a child'. 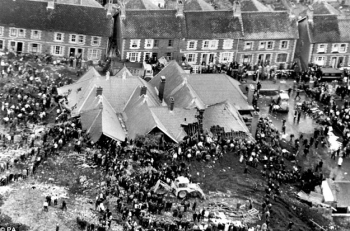 144 people died in the Aberfan disaster: 116 of them were school children. About half of the children at Pantglas Junior School, and five of their teachers, were killed.

So horrifying was the disaster that everybody wanted to do something. Hundreds of people stopped what they were doing, threw a shovel in the car, and drove to Aberfan to try and help with the rescue. It was futile; the untrained rescuers merely got in the way of the trained rescue teams. Nobody was rescued alive after 11am on the day of the disaster, but it was nearly a week before all the bodies were recovered.

The above description is taken from Iain McLean, On Moles and the Habits of Birds: The Unpolitics of Aberfan, Twentieth Century British History, vol.8, Dec. 1997. With quotes from: Gaynor Madgewick, Aberfan: Struggling out of the darkness, (Blaengarw: Valley & Vale, 1996), p.23 (The bulk of the book, including the passage quoted here, comprise the author’s recollections of the disaster, written in a school notebook between 1970 and 1972.) & Report of the Tribunal appointed to inquire into the Disaster at Aberfan on October 21st, 1966, Chairman Lord Justice Edmund Davies, HMSO, 1967, HL 316 & HC 553, p.27.

University of South Wales Seeks Volunteers
Sign up for offers
Sign up for what's on guide
Popular Categories
By clicking 'ACCEPT', you agree to the storing of cookies on your device to enhance site navigation, analyse site usage, and assist in our marketing efforts.
For more information on how we use cookies, please see our Cookie Policy.