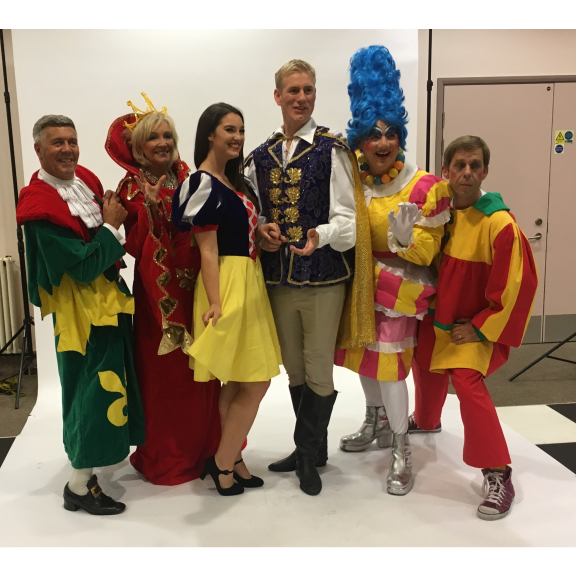 Panto launch signals that Christmas isn’t too far away – oh no it isn’t!

Christmas may seem far into the distance for some – but Northampton’s Deco Theatre is already preparing for it, after officially launching its 2016 Panto. ‘Snow White’ runs from December 9 to 29, with former Coronation Street star Nicholas Cochrane returning for a second year.

Also returning by popular demand is Kim Taylforth, formerly of London’s Burning, and currently touring the country in the stage play ‘Jeckyl and Hyde, which comes to Corby for three nights from September 15 to 17.

Joining them is Colin Ridgewell, once of Grange Hill, and who was a big hit with audiences as an Ugly Sister during the Deco’s May Bank Holiday Panto ‘Cinderella’, Gadget Show presenter David MacClelland – an accomplished actor and theatre director – popular local actor Clive Fletcher, and Georgia Taylforth-Rix, who came through a tough audition to land the part of Snow White.

“I’m absolutely ecstatic,” said Georgia, 26. “I’ve watched Panto at The Deco, so to be appearing in it is fantastic, and a wonderful opportunity for me. Panto at the Deco has a fantastic reputation, and looking at the cast, I’ve no doubt we’re going to deliver another great show for Northampton.”

Nicholas Cochrane said he was delighted to be back at the Deco. “When I was asked if I’d come back I had absolutely no hesitation,” he said. “I had a fantastic time in Beauty and the Beast last year, and absolutely loved the audiences, and their enthusiasm. I’m really looking forward to it.”

Kim Taylforth is appearing in Panto at the Deco for a third time, including last year. She said: “When I had a call asking if I’d like to do it again this year I was thrilled to bits. I love the Deco, it’s such a lovely, homely theatre, and the audiences we get are always such fun and up for a great time.”

Director Stuart Morrison said the Deco’s ‘Snow White’ panto would be another festive treat for local theatre goers. “We have a reputation for delivering fantastic Panto every year, and it’s something we’re very proud of, and this year will be just as good, if not even better!

“We’ve got a fantastic cast together, and we want people to come along, be entertained at a very exciting time of the year, have great fun, and make as much noise as possible.”