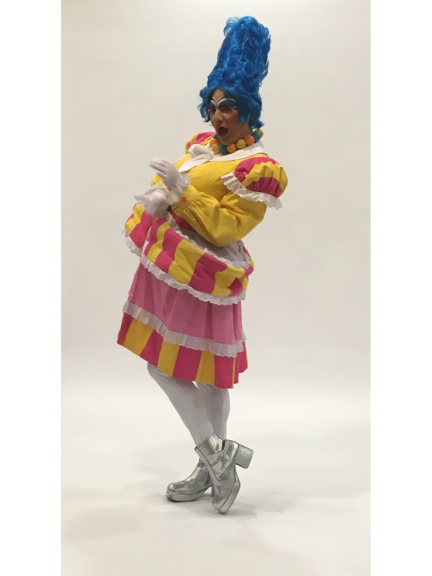 Panto star Colin Ridgewell is urging audiences to “make as much noise as possible” when they come to The Deco Theatre’s ‘Snow White’ Christmas Panto next month.

Colin, who shot to fame as a schoolboy when he played the part of Colin Brown in the poplar BBC series Grange Hill between 1994 and 2001, is a Panto veteran at just 37. This will be his 14th year of Christmas Panto – and earlier this year, he did his first Summer Panto, when he played one of the Ugly Sisters in ‘Cinderella’ at The Deco back in May, proving a big hit with the audiences.

“I loved being at The Deco, it’s an incredible theatre, and doing ‘Cinderella’ was a pleasure,” said Colin. “The audiences were fantastic, and that’s one of the reasons I can’t wait to be back in Northampton this Christmas.

“I absolutely love Panto, and The Deco has quickly established itself as a theatre that delivers Pantomime of the highest quality, as it did with ‘Cinderella’, and I’m looking forward to continuing that trend this Christmas.”

So what is it about Panto that makes it so special? “Oh, that’s an easy one,” said Colin. “It’s the audiences. The feedback from the audience is what you do it for, and there’s nothing better than hearing people laugh, and hearing the children – and the adults – screaming at the top of their voices.

“And that’s what I want to hear at The Deco this Christmas – lots of noise; make as much of it as you can, and have a fantastic time while you’re doing it. That’s what Panto is about – having fun and joining in.”

For someone with so much Panto experience, this is the first time that Colin has been in a production of Snow White.

“I’m also excited about working with a fantastic cast: Nick (Cochrane), Kim (Taylforth), David (McClelland), Georgia (Taylforth-Rix) and Clive (Fletcher) were all such nice people to meet at the Press launch in September, and they’re all very talented performers.

“Not only that, the staff at The Deco are amazing – Jill, Toni, Lisa and the team are such lovely people who make you feel really welcome, and they’re all extremely professional; I was highly impressed during the run of ‘Cinderella’ in May.”

Talking of which, how did Colin feel about Panto outside of the Christmas period?

“Why not? It was a brave move by The Deco, it worked, and we’ll be doing again next year,” he said. “It’s been tried elsewhere, and I think the idea is becoming more and more popular.

“That said, I found it a bit bizarre that I was doing Panto, and yet going out and about in Northampton during the day and it being lovely and sunny – normally during a Panto run I have my winter woollies on, and everywhere is full of seasonal decorations.”

Rehearsals for ‘Snow White’ start on December 2, with the show running from December 9 to 29. Said Colin: “We’ve all got our scripts now, and it looks fantastic. I can’t wait. Panto is always a short rehearsal time, but we’ll all be reading and raring to go come December the ninth, and I just hope that everyone who comes to our show has a fantastic time.

‘Snow White’ at The Deco runs from December 9 to 29. Tickets from The Deco Box Office in Abington Square, by calling 01604 491005, or by booking online: www.thedeco.co.uk

Guy Fawkes night - Start and end your night off with a bang!!
Sign up for offers
Sign up for what's on guide
Popular Categories