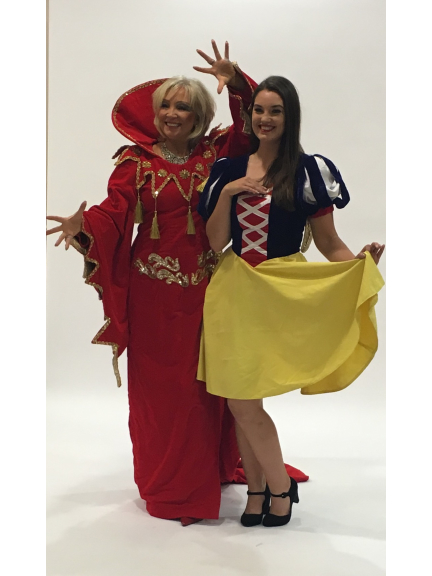 As the clock ticks down towards the opening night of the Deco Theatre’s Christmas Panto ‘Snow White' (December 9 to 29), two members of the cast have a rather special reason for working together: they're auntie and niece!

Indeed, it was quite a shock for Kim Taylforth when she heard that Georgia Taylforth-Rix had successfully come through a rigorous audition to win the part of Snow White; she had no idea she was auditioning in the first place.

Said Georgia, 26: “I auditioned as Georgia Rix, but I go by the name of Taylforth-Rix, because I’m proud of both sides of my family. But I would never want anyone to think I use my family connections in any way to help me win a role in a show, so I audition simply as Rix.

“My auntie almost fell over when she saw me at the launch earlier this month – I kept it as a pleasant surprise, but in fairness, she’d not long returned from holiday, and has been very busy on tour with a play she’s in, so I hadn't really had the chance to tell her anyway!

“Obviously, I’m thrilled to have won the part against some extremely talented opposition, and it’s my first ‘senior’ role in Panto, so it’s very exciting,” she said.

“I’m delighted too, to be performing with my auntie – she’s an amazing actress, brilliant in Panto, and she loves the Deco, so when the chance came up to audition for 'Snow White' I just had to give it a go.”

Georgia is the latest to tread the boards in a family that has established a proud record in theatre and showbiz. Another auntie, Gillian, is famous for her role as Kathy Beale in the BBC soap opera ‘EastEnders’, while mum, Debbie, is a highly respected drama teacher.

“Growing up seeing two of my aunties acting on TV regularly was awesome, and with my mum doing what she does, I just had to follow suit,” said Georgia, who graduated from the acclaimed Guildford School of Acting. “I love it, and I’m so excited about playing Snow White in Panto this Christmas.

“Kim absolutely loves the Deco Theatre, and couldn’t wait to come back this year; and having her around during rehearsals and the run of the show will be fantastic, and I know she’ll be extremely encouraging and helpful.”

Kim, admits to enormous excitement and pride at the prospect of performing in ‘Snow White’ with her niece.

“She’s an extremely talented young lady, and I know she’s going to be fantastic,” she said. “I’m glad she didn’t tell me she was up for the part, I’d have been really nervous for her, and I’m proud that she achieved it on her own merits, not that I would have had any input anyway.

“But I must admit, it was a shock when I turned up and saw Georgia already in costume waiting to pose for the official photographs – I was nearly speechless!”

Director Stuart Morrison said he only discovered the connection when he told Georgia she had got the part. He said: “Fair play to her, she worked really hard at the audition and was chosen on merit, although she knows it wouldn’t have made a scrap of difference even if I was aware of any family connection.

“Georgia has a wonderful stage presence, she really looks the part, and I’m delighted for her.”

For more information, or tickets, go online: http://thedeco.co.uk/event/snow-white-and-the-seven-dwarfs/ or call the Box Office, on 01604 491005