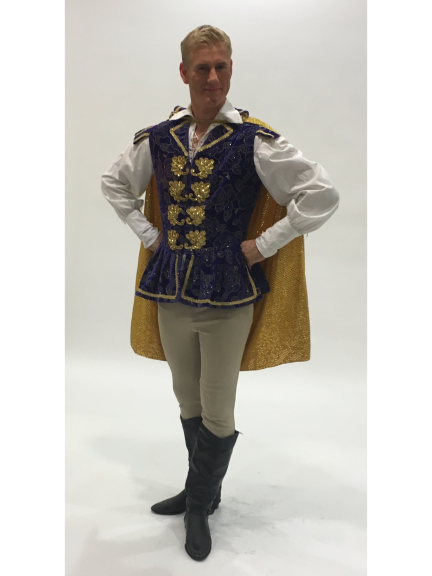 He’ll be appearing in Northampton as Prince Florizel in The Deco Theatre’s ‘Snow White’ Panto in December, but currently you can currently see David McClelland most mornings on BBC1.

David is the technology expert – giving out advice and opinion – on ‘Rip Off Britain’, hosted by Angela Rippon, Gloria Hunniford and Julia Sommerville. Indeed, he’s known on the show as the ‘Golden Girls Gadget Boy’!

Another name by which he is known is ‘TV’s Top Gadget Guru’, which is why you also see him popping up on other TV shows, such as ‘Good Morning Britain’ and ‘This Morning’ on ITV, commenting and giving advice.

But then, David is an accomplished technology journalist, and his knowledge is second to none.

He is also a trained actor, and has both performed and directed, and has appeared in Panto all over the country, winning excellent reviews. Which is why he is so excited about swapping his technology cap for his acting one at the Deco between December 9 and 29 – he loves Panto, and cannot wait for ‘Snow White’ to be up and running.

“I trained to be an actor at drama school, and have appeared in Panto in most years since graduating,” said David, whose other credits include appearing in ‘Blood Brothers’ in Dubai, and in Shakespeare’s ‘Much Ado About Nothing’ during a national tour throughout the UK.

“Most people who’ve come across me know me as a TV presenter and reporter on all things ‘techy’ – hence my nickname as ‘The Gadget Guru’.

“But I love being on the stage, and I love Panto – I was a fan of Panto as a child, and I get so much enjoyment from appearing in Panto as an adult, and I can’t wait to join the fun at The Deco theatre, whose Pantos have received such wide acclaim in recent years.

“Everyone tells me what a lovely theatre it is to perform in, that the audiences are terrific, and the standard of production is top class – so it all sounds good to me.”