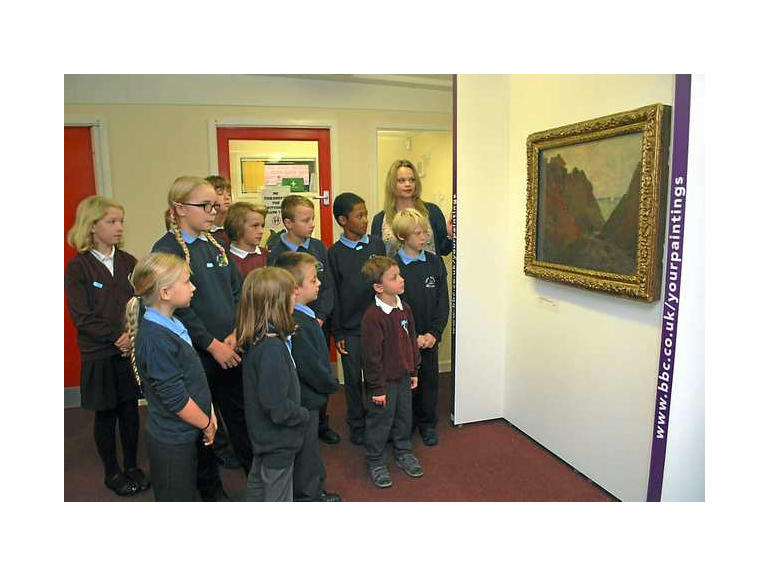 His paintings sell for millions, but pupils at a Shropshire school got the rare chance to get up close and personal with a Claude Monet original. Shropshire pupils get up close to Monet work Onny Primary School pupils view 'The Sunken Road in the Cliff, Varengeville 1882' by Monet Youngsters at Onny CE Primary School, near Craven Arms, watched in awe as the masterpiece was brought into school heavily flanked by security.

The piece, entitled The Sunken Road in the Cliff at Varengeville, is normally hung at The New Art Gallery in Walsall. The painting was taken to the school yesterday after the primary became one of just a handful across the country to successfully apply to take part in Your Paintings: Masterpieces in Schools. The initiative is looking to take a selection of famous paintings, with a combined estimated value of £14 million, into 27 schools in the UK. Other painters whose work is being taken into schools include Gainsborough, L S Lowry, Spencer and Turner.

Onny's chairman of governors, the Venerable Colin Williams, said the school was one of the first to get the chance to take part. He said that it had been a wonderful day. 'The children seemed to have a fantastic time,' he said. 'They had all been doing projects on Claude Monet and impressionist painters and this was the perfect way to supplement that learning. 'They got the chance to look at the painting, talk about it, ask questions of the experts. 'By the end of the day they all knew a lot more about the subject than I certainly did at their age. 'It is extremely flattering that we were chosen to take part in this project.

Let us not forget just a couple of years ago we were under threat of closure from Shropshire Council. 'We managed to persuade them otherwise and now we are one of the first schools in the country to take part in this groundbreaking project. It shows how important we can be in the community.'

WIDOWS PAYMENT
Sign up for offers
Sign up for what's on guide
Popular Categories
By clicking 'ACCEPT', you agree to the storing of cookies on your device to enhance site navigation, analyse site usage, and assist in our marketing efforts.
For more information on how we use cookies, please see our Cookie Policy.