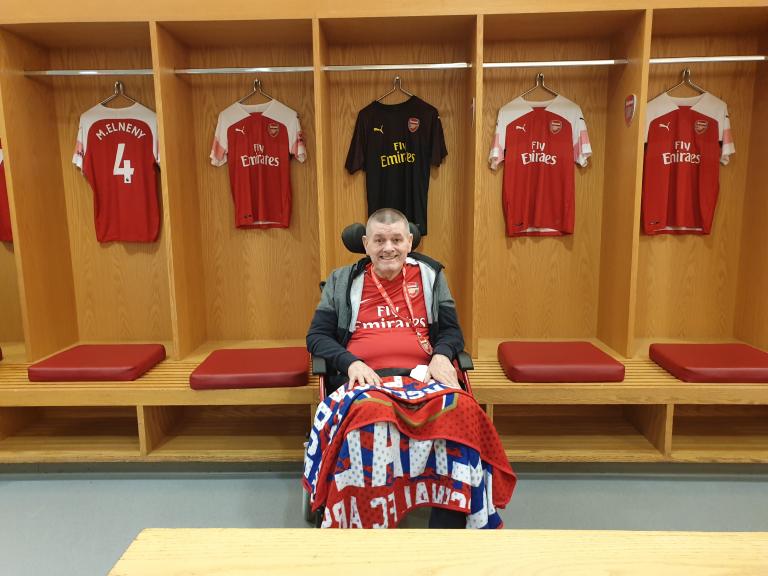 A wish came true for a care home resident in Lowestoft when he finally got to visit the grounds of the football team he has supported since he was a young boy.

Lifelong Arsenal fan, Raymond Forward, a 76-year-old resident at Care UK’s Britten Court, was given the opportunity to visit the Emirates Stadium, the home of Arsenal that he has been waiting to see for years.

Born in London, Ray moved to Lowestoft as a young boy for his father’s work as a fisherman. Although living several hours away, Ray continued to follow every move of his local team, making the three-hour journey to watch them play each week. Ray has three sons – Andrew, Mark and Shane. Still living in Lowestoft, as soon as his boys were old enough, Ray also began taking them along with him on the 130-mile journey to Highbury each week.

Ray, who now lives with dementia, still loves to reminisce about his beloved Arsenal, and despite having to stop attending the games several years ago, remains an avid supporter of the club.

Known around the home for wearing iconic Arsenal shirts every day, when the Care UK team at Britten Court discovered that Ray had never seen the Emirates Stadium, home to Arsenal since 2004, they decided to organise a surprise visit. During the trip, Ray was given a tour around the grounds, and was even able to visit the players’ changing room.

Chloe Swarbrick, home manager at Britten Court, said: “Everyone at Britten Court knows how much Arsenal FC means to Ray, and the team members love having chats with him about how his team is doing in the league! It was fantastic to be able to grant Ray’s wish to see the new grounds for the first time and to relive some of his fondest memories.”

Ray added: “I had a wonderful day and I was so pleased to be able to visit the home of my team. I loved being able to look around the player’s changing rooms and finally seeing the pitch up close! The trip brought back so many happy memories of going to the games, something that has been a huge part of my life.”

Britten Court is a modern, purpose-built home that provides nursing and residential care, as well as dementia care on a short-term and permanent basis.

Flowers for All Occasions – What do people choose in Lowestoft?