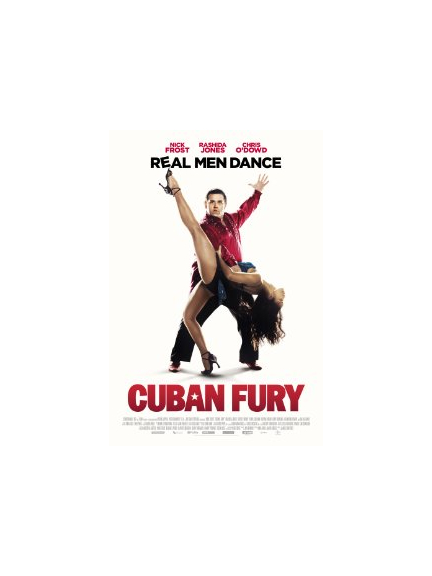 Cuban fury is the brainchild of Nick Frost. Encompassing 6 months of intense dance training for Frost, this is a film version of the average man’s Strictly Come Dancing journey.

Frost is Bruce, a lovable loser with a secret sequined past. Not much of a hit with the ladies, Bruce falls head over heels for his new American boss Julia, played by Rashida Jones. Upon discovering her love of salsa, can our lovable hero dust off his dancing shoes and win over his lady?

The path of true love never runs smoothly though and it is no different for Bruce. The office lothario Drew, played brilliantly by Chris O’Dowd, also has his sights set firmly on the new American prize. The rivalry between the two culminates in a spectacular (and hilarious!) rooftop dance-off.

Bruce does have several allies though. His grouchy former dance teacher (a fantastic Ian McShane) challenges him to bring out his inner fury and overcome his inhibitions. The sparkling Olivia Colman is great as Bruce’s wacky but lovable sister.

For me, the real star of the show is Kayvan Novak (of 4 lions and Face/Phone Jacker) as the ultra camp Bejan. Bejan is an invaluable (and very comical) ally to Bruce in his journey from the sidelines to centre stage.

Nick Frost is also excellent as Bruce, the most unlikely salsa king. Frost’s hard work pays off though in the final dancing scenes as his feet move in a blur. The salsa scenes are broken up nicely by the comedic moments so that even the dance-phobic viewers are kept entertained.

The film also has a great soundtrack that puts you in the mood to dance.

If you fancy following in Bruce’s dancing shoes, there are several beginners salsa classes in Leeds such as the Tuesday night salsa at Distkt or Wednesdays at BRB.

I'm passionate about local business and a champion for what's great about Leeds.