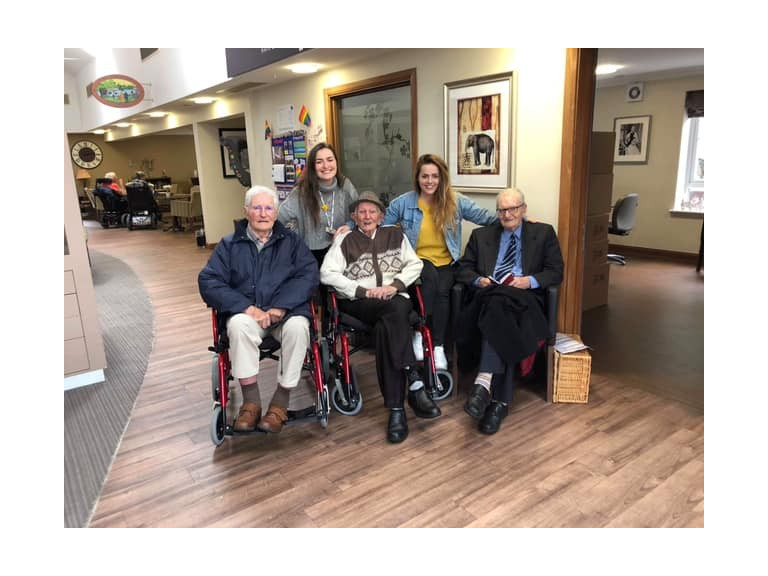 A Leamington care home has set up a special social initiative to enable male residents to enjoy a calendar of sporting fixtures, kicking off with Wasps v Harlequins at the Ricoh Arena.

The team at Care UK’s Priors House, on Old Milverton Lane, is lucky enough to have a number of residents with sporting backgrounds, including former professional rugby player Tim Drew, who played for the Harlequins, and later Roselin Park. The home decided to set up the ‘Gents on Tour’ initiative to facilitate access to rugby, football and cricket matches in the locality.

Tim commented: “It’s great to be part of the ‘Gents on Tour’ sporting squad and I really enjoyed watching the Harlequins play, it brought back many happy memories of when I used to play for them.

“I’ve always been interested in rugby, my dad played rugby for the farmer’s union, so me and my brother were brought up with rugby in our blood.

“It was wonderful to play at a high level. After initially being picked to play for my school, I was with the Harlequins for around five years – it was fantastic, you were top dog if you played for that team! I really was incredibly proud to be part of the team, and it was wonderful to be reminded of that while watching the game.”

Francine Summers, home manager at Priors House, said: “Residents are at the heart of everything we do here at Priors House, and when we found about a number of residents’ passion for sport and Tim’s history playing for the Harlequins, we knew we had to do something special. Sport is particularly powerful for male residents when it comes to reigniting positive memories.

“‘Gents on Tour’ was created, and three residents – with a combined age of 274 – from Priors House headed off on their first tour to see a premiership rugby match between the Wasps and the Harlequins.

“Joined by a fourth gent from our sister home, Highmarket House in Banbury, a fantastic day was had by all. Not only did they enjoy watching all the action, but it was a positive opportunity to spark happy memories by reminiscing about their time playing the glorious game. We’re looking forward to hosting another ‘Gents on Tour’ trip over the summer.”

The ‘Gents on Tour’ club has also visited Wembley to enjoy a football match, and more trips are already being planned.

Priors House is a state-of-the-art care home which provides full time residential, nursing and dementia care, as well as short term respite care. Designed to enable residents to live enjoyable and fulfilling lives, the care home has its very own cinema, coffee shop and hair salon, with plenty of space both indoors and out for relaxation and recreation.

Care Home Pen Pals Meet for First Time on International Friendship Day
Sign up for offers
Sign up for what's on guide
Popular Categories
By clicking 'ACCEPT', you agree to the storing of cookies on your device to enhance site navigation, analyse site usage, and assist in our marketing efforts.
For more information on how we use cookies, please see our Cookie Policy.