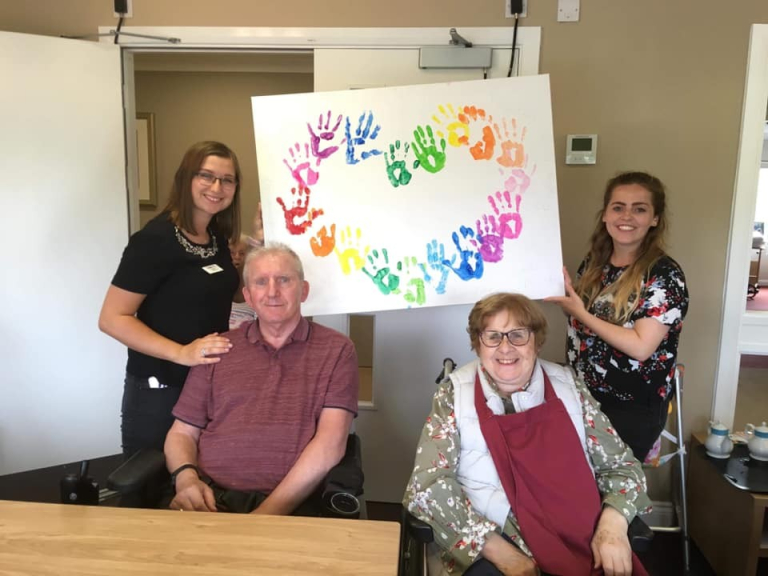 Pen pals from two care homes in the region met for the very first time on International Friendship Day (30 July 2019).

Residents from Care UK’s Priors House in Leamington Spa, and Perry Manor in Worcester, forged a friendship over pen and paper many months ago, as part of the homes’ pen pal clubs.

Having never met face-to-face, team members at the care homes decided it was time for the two groups of residents to unite at Perry Manor, and chose the appropriate occasion of International Friendship Day to host the meet-up.

The two groups of pen pals got to know each other over tea, cake and crafts. To leave a lasting memory, the Care UK homes helped residents make a collaborative piece of artwork to commemorate the day.

The pen pal scheme was set up by the lifestyle teams at Priors House and Perry Manor to give respective residents the opportunity to build relationships and friendships, regardless of location. It offers the opportunity for pen pals to reciprocally share their experiences, life stories, memories and day-to-day encounters, to enhance social connections and encourage inter-home communication.

Pen pals Gill and Pat have been in contact since the end of last year and have now become very good friends.

Gill, from Priors House, said: “I really do enjoy being part of the pen pal club here, and to meet Pat in person has been a delight. We like to chat about all sorts in our letters. I always look forward to my post arriving and finding out what Pat has been up to!

Perry Manor’s Pat added: “It was lovely to finally meet Gill and get to know each other. It’s not just the writing I enjoy, but the joy it brings when I receive a reply. We’ll have lots to talk about now!”

Home manager at Priors House, Francine Summers, commented: “Residents and team members had a very warm welcome from all at Perry Manor, who had put on a lovely afternoon tea for the group.

“The pen pal club members have been writing to their acquaintances at Perry Manor for a few months now, and it’s fantastic that they have finally met. The whole afternoon was a real success.”

Katherine Matthews, home manager at Perry Manor, added: “It was great to witness the friendships, forged via letter, coming to life on this special day. Rapports were formed as residents shared stories, and we can’t wait to host the next meet-up!”

Perry Manor, on Charles Hastings Way in Worcester, and Priors House, on Old Milverton Road in Leamington Spa, are both state-of-the-art Care UK homes, which provide full time residential, nursing and dementia care, as well as short term respite care. Designed to enable residents to live enjoyable and fulfilling lives, the care homes have their very own cinema, coffee shop and hair salon, with plenty of space both indoors and out for relaxation and recreation.

Leamington Spa Care Home Hosts Teddy Bear Picnic for Local Primary School
Sign up for offers
Sign up for what's on guide
Popular Categories
By clicking 'ACCEPT', you agree to the storing of cookies on your device to enhance site navigation, analyse site usage, and assist in our marketing efforts.
For more information on how we use cookies, please see our Cookie Policy.