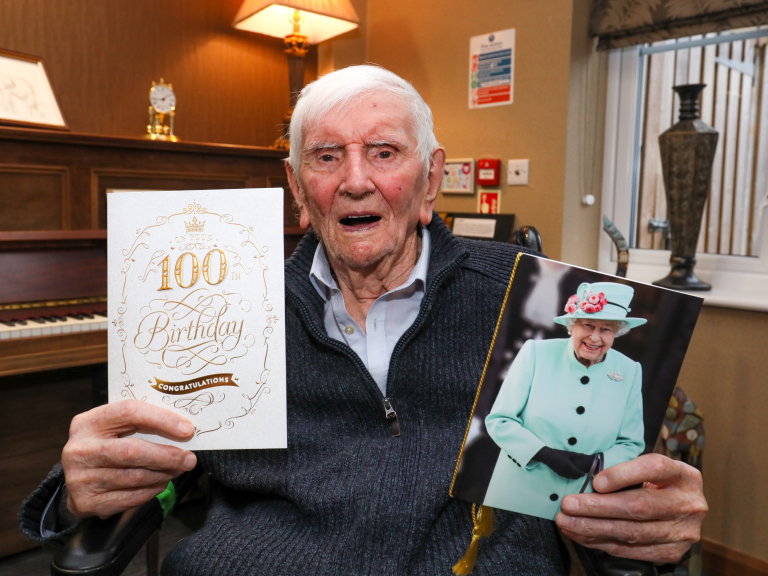 Norman Edwards celebrates his 100th birthday with a letter from the Queen.

“Serving your country and having adventures” – local care home resident, Norman Edwards, has revealed his secret to a long life on his 100th birthday.

Birthday celebrations were in full swing at Care UK’s Priors House, on Old Milverton Lane, when resident Norman Edwards turned 100 years ‘young’ on 27th November. He revealed his secret to living to this impressive age is having adventures and enjoying a nice, cold lager every day.

Norman was born on 27th November 1919, in Garndiffaith, Wales, and always loved exploring the great outdoors. His appetite for adventure meant he joined the Scouts at a young age, and became a Scout Leader when he was an adult. He also joined his local rugby team and played throughout his school years.

Norman served in the Second World War and was awarded with seven war medals, including the Africa Star, the Italy Star and the France and Germany Star. He was also presented with a General Service Medal, because as soon as he returned to Britain in 1945, he was immediately shipped out to Palestine to locate an illegal mobile station that was broadcasting anti-British dialogues. Norman is proud to have served in the British Army and loves telling stories about his military service; he even wrote a book called ‘Runaway Pigs and Other Such Tales’.

To celebrate his milestone birthday, Norman was joined by the local mayor, Councillor Bill Gifford, as well as members of the British Legion, including the chairman. Also in attendance was a veteran who served in the RAF, who reminisced with Norman about their time in the military. Finally, the team surprised Norman with a visit from band The Hanksters, which performed a few songs and even lent Norman one of their guitars to remind him of his love of music.

Norman married his wife, Dot, in 1946, and had four children, 13 grandchildren and 20 great grandchildren. Sadly, Dot passed away in 1998, but Norman remains close to his family. He also still enjoys watching rugby, having joined the Priors House team on a recent trip to watch Wasps v Harlequins at the Ricoh Arena.

Home manager at Priors House, Francine Summers, said: “Norman is a well-loved resident here at Priors House, having moved in when we first opened. It’s fantastic to see him celebrating this incredible milestone with his friends here at the care home. He is a very happy, sociable person, and has built lovely friendships with residents and the team – we all love hearing about his adventures.

“Residents are at the heart of everything we do here at Priors House, and we always like to throw a party for special celebrations, so Norman’s 100th birthday was no exception. It was wonderful to raise a glass to him on his special day.”

Priors House is a state-of-the-art care home which provides full-time residential, nursing and dementia care, as well as short-term respite care. Designed to enable residents to live enjoyable and fulfilling lives, the care home has its very own cinema, café and hair salon, and there is plenty of space, both indoors and out, for relaxation and recreation.

To find out more about Priors House, call customer relations manager, Maria Cridge, on  01926 675 217 or email at maria.cridge@careuk.com

Leamington Spa Care Home Hosts Teddy Bear Picnic for Local Primary School
Sign up for offers
Sign up for what's on guide
Popular Categories
By clicking 'ACCEPT', you agree to the storing of cookies on your device to enhance site navigation, analyse site usage, and assist in our marketing efforts.
For more information on how we use cookies, please see our Cookie Policy.