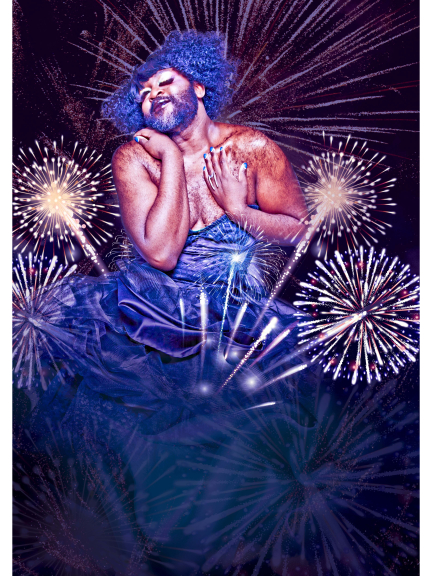 The Lawrence Batley Theatre are throwing a 25th birthday party and everyone’s invited. Booked to perform is very special guest Le Gateau Chocolat. Drag sensation Le Gateaux Chocolat’s exuberance and amazing mastery of costume, dance, comedy and spectacle make him the perfect act to celebrate the Lawrence Batley Theatre’s 25th birthday. The evening’s entertainment will be followed by a firework display in the theatre’s beloved courtyard. Le Gateau Chocolat is the most recent addition to the theatre’s programme of special anniversary events (Wed 4 – Sun 8 September). Also on the anniversary line-up: a joyous community production of Henry V, an exhibition of photographs from Simon Annand’s iconic series The Half, and a reading by Poet Laureate Simon Armitage.

In ICONS, Le Gateaux Chocolat walks the tightrope between his public and private personas. The show explores relationships with our icons – the people, the moments, the books, the relationships that have come to shape us, or the ideal we aspire to. Expect an eclectic mix of music; pop to opera, Kate Bush, and Whitney, Elvis to Wagner and Shirley to Gershwin as Le Gateau investigates his own objects of worship through the songs and music of his personal icons.

Henry Filloux-Bennett, Director and Chief Executive of the Lawrence Batley Theatre, said: “I couldn’t be more delighted that we’re able to bring Le Gateau Chocolat to Huddersfield. For me personally it’s a complete dream come true. I’ve been a huge fan ever since I first saw him years ago as part of ‘La Clique’; there is quite simply no-one like Gateau. His shows are jaw-dropping, his voice stunning, and I have no doubt he is going to make our birthday completely unforgettable.”

Le Gateau Chocolat said: “Beloved Huddersfield, I am honoured and thrilled to perform as part of the 25th Birthday celebrations. It’s going to be a fabulous night!”

25th Birthday Party with Le Gateau Chocolat follows a run of Henry V (Wed 4 – Fri 6), a community production made by 70 people, of all ages, from Kirklees. The show is produced by Front Room productions and directed by Oliva Race and Leeds Playhouse’s Young Director, Sameena Hussain. The staging is creatively inspired by the 25th anniversary and celebrates the variety and vibrancy of Huddersfield. A Shakespearean feud develops between two factions of the party-planning committee. How will we see in the theatre’s 25th year - with champagne and a string quartet, or with balloons and a 90s playlist? In this all-singing, all-dancing show for all ages, a party quickly descends into war.

Saturday 7th September will also see the opening of the theatre’s new gallery space with an exhibition of iconic photography collection The Half. Simon Annand’s portrait series depicts stars of the stage like Cate Blanchett and Judi Dench in the intimate 35 minutes before they perform. Sunday’s entertainment is An Afternoon with Simon Armitage (Sun 8 September). The Poet Laureate will perform a special homecoming reading from his collection Zoom! which features poems set in and around Huddersfield.

Issued for & on behalf of Lawrence Batley Theatre

THREE IN A ROW QUALITY AWARD FOR REDROW’S ANDREW
Sign up for offers
Sign up for what's on guide
Popular Categories
By clicking 'ACCEPT', you agree to the storing of cookies on your device to enhance site navigation, analyse site usage, and assist in our marketing efforts.
For more information on how we use cookies, please see our Cookie Policy.