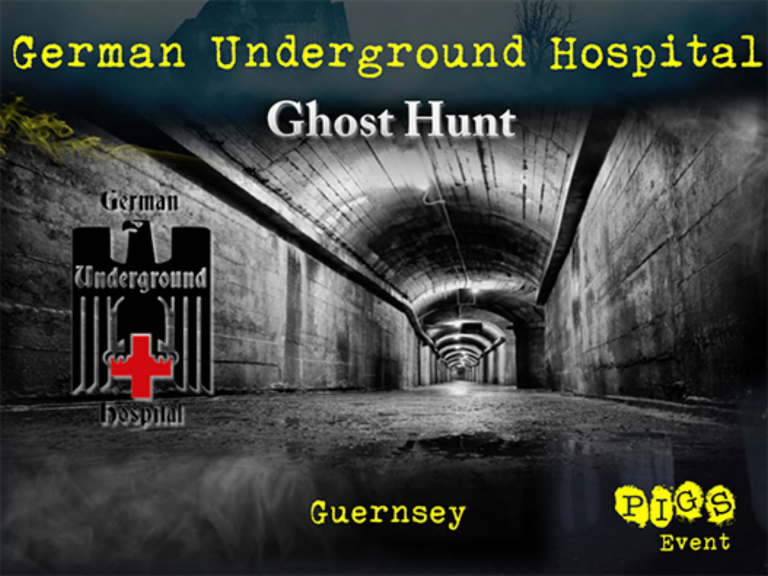 Join the Paranormal Intelligence Gathering Service at this exclusive haunted location for a night of paranormal investigation.

Will you dare investigate The German Underground Hospital with us?

*Small teams looking to collect evidence of the ghosts

*latest equipment including thermal imaging available for all to use

Built during the occupation of Guernsey by Nazi Germany using the forced labour of prisoners of war many of them lost their lives during its construction. The Underground Hospital and Ammunition store stretches through one and a quarter miles of corridors and rooms. The Hospital area has eight wards, a mortuary, operating theatres, X-ray room, cinema all completely invisible on the surface apart from the entrance to the site.

We have investigated several of Guernsey’s haunted treasures in the past and each time we are told of the haunted reputation of the German Underground Hospital. Until now its not been possible for any form of ghost investigation and so this will be the first official ghost hunt held at this location. To the people of Guernsey this is probably the most haunted location and I can tell you that the other places we have also visited were ranking very high in the how haunted is this place charts so I think we are in for a real treat. Many of today’s visitors have captured strange phenomena and possible apparitions in their photographs.

The mission will be to try and collect any evidence of ghosts using the latest investigation equipment and also some traditional methods which include an original Franks Box, Thermal imaging, The use of Infrasound capable Ghost Ark equipment, the Crosshair detector, Full Infrared Video and many other devices.

The cost for the night is £69 per head, 8.00pm for an 8.30pm start. The night will finish at 1.30am, by which time you will have had the chance to experience what it is like to be a paranormal investigator, and had the opportunity to try a mixture of traditional techniques as well as modern technology to try to decide for yourselves – WHO HAUNTS The German Underground Hospital ? A £35 deposit secures your place, with the balance to be paid a few weeks before the event.